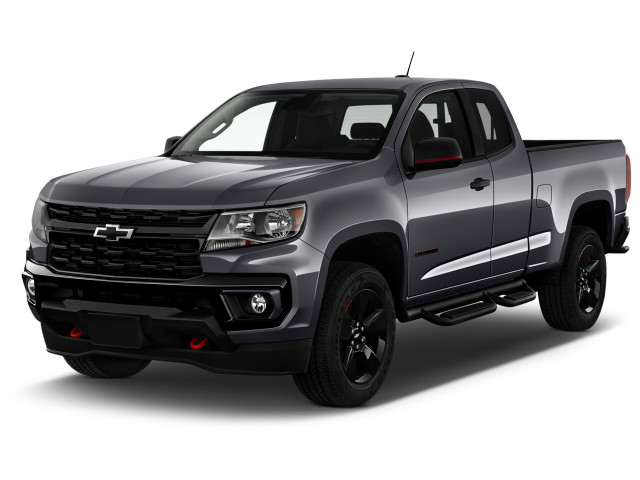 The Chevrolet Colorado is a mid-size pickup truck built for wide-ranging uses: workaday hauler, small family vehicle, even Baja runner. It is related to the GMC Canyon.

Once virtually devoid of competitors, mid-size pickups are enjoying a resurgence thanks to skyrocketing prices for full-size models. With the Colorado, Chevy competes against pickups such as the Toyota Tacoma, Honda Ridgeline, and Nissan Frontier. A Ford Ranger isn't far off either, and others may follow soon.

The Colorado nameplate dates back more than a decade, but was benched for a couple of years while General Motors looked to its global operations for a redesign that debuted for the 2015 model year.

Chevy changed the Colorado very little lately, with revised bumpers and tailgates bookending the 2021 model; the ZR2 Bison returns, as does the turbodiesel engine, and all but the base Work Truck gets an 8.0-inch touchscreen.

The Colorado is offered with a choice of 4- and 6-cylinder engines, with rear- or 4-wheel drive, and with manual or automatic transmissions.

The base engine is a 200-horsepower, 2.5-liter inline-4, available with a 6-speed manual or 6-speed automatic transmission. Buyers can also opt for a 3.6-liter V-6 engine, which makes 308 hp and 275 lb-ft of torque and is paired solely to an 8-speed automatic. Both engines feature aluminum blocks and heads and are fitted with direct-injection technology, with the V-6 also featuring cylinder displacement that shuts down two cylinders to save fuel under light load situations.

Initially, the current Colorado debuted with a similarly sized V-6, but it lacked the cylinder displacement technology and it was only available with a 6-speed automatic.

For the 2016 model year, a 181-hp, 2.8-liter Duramax turbodiesel 4-cylinder was added to the Colorado lineup. It's the most capable version of the pickup truck, and the most fuel-efficient. The EPA rates it up to 25 mpg combined.

The modern body-on-frame underpinnings of the latest Colorado provide impressive payload ratings; diesels can tow up to 7,700 pounds, while 4-cylinder models can pull 3,500 pounds. Most models offer a choice between rear- and four-wheel drive.

Inside, Extended Cab and Crew Cab versions both accommodate back-seat passengers, although it's little more than a token effort in the latter. The Colorado is offered in Base, Work Truck, LT, and Z71 trims, with LT models comfort-oriented and well-trimmed inside while the V-6-only Z71 takes on more of an off-road flavor. A Colorado ZR2 was added to the lineup late in 2017 and it's the most extreme mid-size off-road truck yet with its suspension lift, wider track, and three locking differentials.

Cabin comforts are definitely improved versus the last versions of the Colorado, with good audio and smartphone connectivity, available navigation, and in top models, a 7.0-inch touchscreen infotainment system. There's also available OnStar 4G LTE data connectivity, which might help keep those who work out of their trucks.

In 2017, Chevrolet gave the Colorado a new ZR2 model with a wider track, a lifted suspension, and a trio of lockable differentials. For 2018, it was unchanged. In 2019, Chevy updated the Colorado's infotainment system and added an HD rearview camera.

The Colorado was originally introduced by General Motors back in 2004 as a replacement for the Chevrolet S-10. This version was produced through the 2012 model year and was also sold by GMC as the Canyon mid-size pickup, which replaced the GMC Sonoma. To complicate matters further, the Chevy Colorado and Canyon were developed together with Isuzu, which also sold a version of the pickup truck called the i-series.

Underpinning all three vehicles was the GMT355 platform, a variation of which was used for the Hummer H3 SUV. The platform offered standard, extended and four-door crew cab bodystyles for the Chevrolet Colorado as well as rear- and four-wheel-drive configurations. With a starting price in the teens, the Chevrolet mid-size pickup truck offered great value in this segment and was relatively unique in that a V-8 engine option is available. Its closest rivals, such as the Ford Ranger and Dodge Dakota, were cancelled a model year or two before the Colorado last went out of production.

The biggest change came in the 2009 model year with the introduction of a new V-8 option and a minor facelift. The Vortec V-8 engine displaced 5.3 liters and developed peak output of 300 hp and 320 lb-ft of torque. This model understandably offered the best performance, achieving a maximum towing capacity of 6,000 pounds and a sub-seven-second 0-60 mph acceleration time. At the other end of the spectrum, the 4-cylinder variant offered the best fuel economy, returning an EPA-rated 18 mpg in the city and 25 mpg on the highway.

Those previous versions of the Chevrolet Colorado were built in Shreveport, Louisiana; the current version is assembled at a plant in Wentzville, Missouri.

Rate and Review your car for The Car Connection! Tell us your own ratings for a vehicle you own. Rate your car on Performance, Safety, Features and more.
Write a Review
For 2016 Chevrolet Colorado

Have put on 10000 km on my z71 midnight edition. the truck looks great and drives great. I have had no problems so far.
people found this helpful.
Was this review helpful to you? Yes
2016 Chevrolet Colorado 4WD Crew Cab 140.5" LT

Its a very nice sized pick up. The gas mileage is great so far[24 mpg]. I just love it!!!!
people found this helpful.
Was this review helpful to you? Yes
See More Reviews