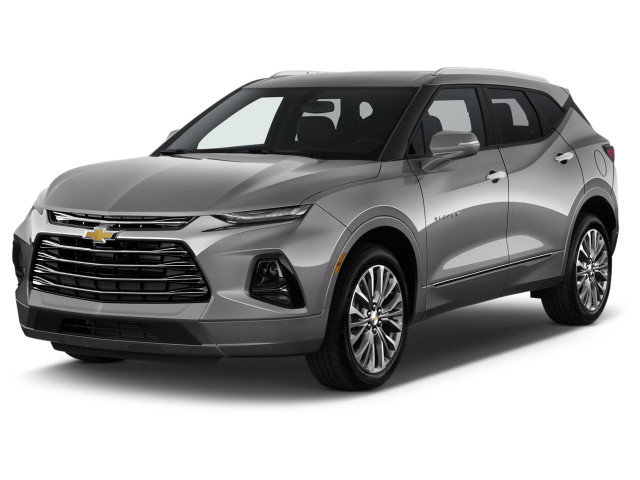 The Chevrolet Blazer brings back a familiar badge to the GM brand's lineup, but reformats what's underneath.

Chevy last sold a truck-based Blazer SUV in the 2005 model year. The new vehicle is a mid-size crossover SUV with front-drive roots, seating for five, and a base inline-4 engine. It slots between the Chevy Equinox and Traverse in GM's crossover-SUV lineup, and is sold in base, Premier, and RS models.

With the new Blazer, Chevrolet adopts a fashion-forward set of styling cues far removed from the blocky Blazers of the past. The shape wears some details now considered crossover couture, from LED lighting, expressively stamped fenders, and blacked-out rear roof pillars that let the roof appear to float.

The Blazer offers driver-selectable modes that change up throttle and stability control to accommodate available traction. The front-drive Blazer also can be fitted with all-wheel drive as an option. On some models with AWD, the system is able to disconnect the rear wheels from power, to improve fuel economy. On RS and Premier models, a twin-clutch AWD system can deliver varying levels of power to the rear wheels for better traction and handling.

Gas mileage ranges from the low to the mid-20-mpg range.

The Blazer can tow up to 4,500 pounds when equipped with the available V-6. A hitch view on the rearview camera gives drivers guidance on connecting their vehicle.

Base Blazers ride on 18-inch wheels and tires. Chevy offers upgraded wheels, up to 21-inchers.

The five-seat Blazer has a sliding rear seat, a feature the Equinox once offered. Front heated and cooled seats and a heated steering wheel work in unison with automatic climate control and/or remote start. Heated rear outboard seats are available.

Chevy claims up to 64.2 cubic feet of cargo space behind the front seats, and 30.5 cubic feet behind the second-row seat in its rearmost position. A hands-free power tailgate comes standard on RS and Premier editions. An electronically lockable glovebox, a cargo management system and a panoramic twin-pane sunroof are available, as are some advanced safety features such as adaptive cruise control, and a rear mirror camera.

Wireless smartphone charging and USB ports are offered on all models, as are an 8.0-inch touchscreen for infotainment, Apple CarPlay and Android Auto, and hardware for in-car wireless data.

For the 2020 model year, the mid-range Blazer trims gained the 228-hp turbo-4 engine as an option.

In 2021 Chevy made automatic emergency braking standard on some of the more expensive Blazer trims. For 2022, the Blazer lost its base engine and L trim level.

Rate and Review your car for The Car Connection! Tell us your own ratings for a vehicle you own. Rate your car on Performance, Safety, Features and more.
Write a Review
2019 Chevrolet Blazer FWD 4-Door L

Hopefully the upper end models will have a better appeal!
people found this helpful.
Was this review helpful to you? Yes
For 2003 Chevrolet Blazer