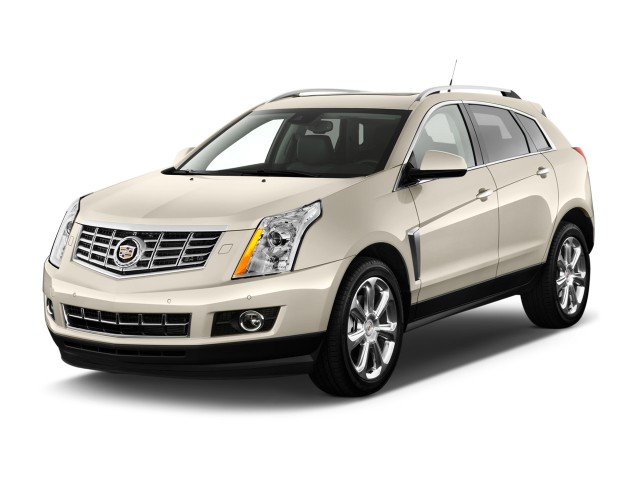 Cadillac's SRX will be replaced this year by the new XT5 SUV. The current rivals for the SRX include the Volvo XC60, Audi Q5, Lincoln MKX, Lexus RX and the Mercedes-Benz GLK/GLC. Standard front-wheel drive can be upgraded to all-wheel drive, both powered by the same V-6 mated to a six-speed automatic.

The second-generation, current SRX made its debut in 2010, and its aggressive design has proven a hit with buyers.

Though the mid-size crossover SRX has been a strong seller for Cadillac—it was the biggest seller by volume in 2015—the model will have a short run in 2016 before making way to the XT5.

Based on the Provoq concept, the new SRX's form is edgy and modern. It’s also a bit more compact than its predecessor, offering only a V-6 engine. The SRX is built on its own platform, but shares elements of the underpinnings of the Chevy Equinox and GMC Terrain. The shift to the new platform also included a change to either front- or all-wheel drive, ditching the previous model's rear-drive basis.

It took a while for Cadillac to find an engine it liked for the SRX. At launch, the second-gen model had a 265-horsepower 3.0-liter V-6 as standard, with a Saab-sourced, 300-hp, turbocharged 2.8-liter V-6 as an option. Both were offered with a choice of front- or all-wheel drive, but neither engine was a favorite, with the 3.0-liter feeling a bit anemic and coarse and the 2.8-liter providing uneven power delivery. Cadillac eventually dropped both by 2012 in favor of a 308-hp 3.6-liter V-6 that largely solves those problems, giving strong and smooth performance with maybe a little too loud of a soundtrack.

More high-tech options and a more refined interior are the hallmark of the new SRX. Whichever basic setup you choose, the SRX is available with a range of optional upgrade packages, though the front-drive vehicle’s upgrade path is skewed toward luxury features, while the all-wheel-drive SRX is pointed more toward a mixture of luxury and performance upgrades. Standard features across most of the range include dual-zone climate control, SiriusXM Radio, OnStar telematics, and tire pressure sensors. Optional upgrades add lots of potential, with a large panoramic sunroof, memory seats, a rearview camera system, wood trim, and a universal home remote available in many packages.

For the 2013 model year, Cadillac installed its CUE touch-screen interface—with haptic controls, a reconfigurable instrument cluster, new steering-wheel controls, and extended voice controls—into the SRX. The system can connect up to ten smartphones or other media devices. Otherwise, the SRX received a couple of new active-safety packages—including a haptic-feedback seat that vibrates along with audible alerts—and a new entertainment pack, while active noise cancellation was made standard throughout the model line.

New for the 2015 model year is the inclusion of 4G LTE connectivity. It offers quicker connections to OnStar and, for an extra monthly fee, can create an in-car wi-fi network for mobile devices such as phones, tablets, and laptops. The SRX carried over unchanged for the 2016 model year.

According to the EPA, the SRX manages 17 mpg city, 24 highway, 19 combined. The all-wheel-drive version reduces those figures each by 1 mpg.

The XT5 will go on sale in 2016. Cadillac is rumored to be working on better filling out its crossover lineup in the future, with the XT5 likely to be joined by a larger, three-row, car-based utility and possibly something smaller in the compact segment.

Rate and Review your car for The Car Connection! Tell us your own ratings for a vehicle you own. Rate your car on Performance, Safety, Features and more.
Write a Review
2016 Cadillac SRX FWD 4-Door Performance Collection

Beautiful to look at but poor build and component quality

Would have excepted more from cadillac