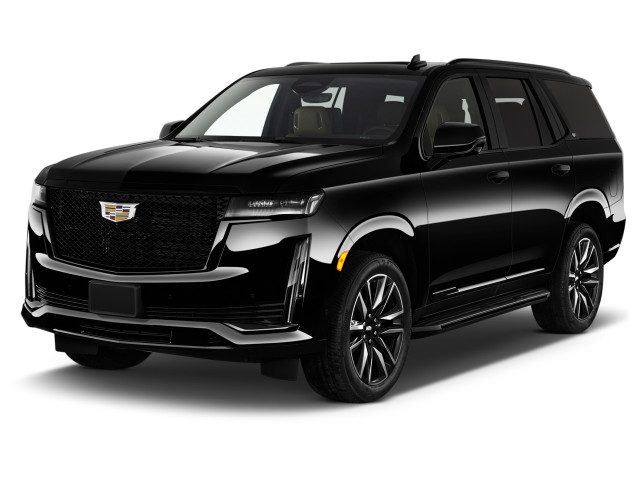 The Cadillac Escalade sets an opulent high-water mark for GM sport-utility vehicles. It's a full-size wagon with four-wheel drive, seats for up to eight passengers, and a tow rating of up to 8,200 pounds.

With the Escalade, Cadillac has an even more refined SUV now than it had in past generations. The latest Escalade offers three rows of seats in a choice of two body lengths. It is available in either standard or long-wheelbase editions—just like its mechanical cousins, the GMC Yukon and Yukon XL and the Chevrolet Tahoe and Suburban. The long-wheelbase body style is called ESV.

Cadillac redesigned the Escalade for the 2021 model year with a bigger footprint, more technology, an independent rear suspension, and a luxurious interior.

The Escalade rivals vehicles such as the Lincoln Navigator, Mercedes-Benz GLS-Class, and Infiniti QX80—even some Range Rover models.

Riding on a new platform shared with the 2021 Chevrolet Tahoe/Suburban and 2021 GMC Yukon/Yukon XL, the 2021 Escalade gets an independent rear suspension for the first time. A passive suspension is standard, but adaptive dampers and a four-corner air suspension system with up to 4 inches of adjustability are available.

The 2021 Escalade is larger than its predecessor by nearly 8 inches with a 4-inch longer wheelbase. Despite the larger size, the exterior is more evolution than revolution. The front is still blunt and upright with an imposing grille. The vertical daytime running lights and horizontal headlights are similar to those of the XT6 crossover SUV. The vertical taillights barely change from last generation other than more-intricate detailing. Luxury models sport platinum silver exterior accents while Sport models black out everything with shiny black plastic. Every 2021 Escalade rides on 22-inch wheels regardless of trim.

Inside, the 2021 Escalade's design is ripped right out of the Escala concept. Soft leather and available woven materials cover the doors and lower portion of the dashboard. The dashboard is dominated by more than 38 inches of thin, curved, OLED screen comprised of a 7.2-inch touchscreen to the left of the gauge cluster with vehicle information, a 14.2-inch digital gauge cluster, and a 16.9-inch touchscreen infotainment system in the center of the dash. Key functions like phone and navigation can also be run through a rotary controller and hard buttons on the center console.

The navigation system features augmented reality that allows for street views with directional overlay arrows in the 14.2-inch digital gauge cluster. Apple CarPlay and Android Auto compatibility are standard. A rear seat entertainment system employs a pair of 12.6-inch screens mounted to the backs of the front seats. Rear-seat passengers can submit destination suggestions via the rear screens to the driver.

Third-row occupants receive the most benefit from the Escalade's increased size, with more than 10 inches of additional legroom, but second-row passengers will enjoy seats that now slide fore and aft. Cargo capacity behind the third row is up by more than 68 percent; the Escalade can haul up to 25.5 cubic feet of stuff with all the seats in place, and that grows to 109.1 cubic feet with the second and third rows folded. The independent rear suspension allows the third row to fold flat.

A carryover 6.2-liter V-8 with 420 horsepower and 460 pound-feet of torque is the standard engine. Those looking for better fuel economy will want to opt for the 3.0-liter turbodiesel inline-6 with 277 hp and 460 lb-ft of torque. Regardless of which engine is chosen, power flows to the rear wheels via a 10-speed automatic transmission. Four-wheel drive with low-range gearing and an electronic limited-slip differential is available.

For those who plan to tow, Cadillac offers up to nine camera views along with the ability to extend the blind-spot monitoring system to include the attached trailer.

The options list includes a head-up display refrigerator and freezer for the center console.

The Escalade showed up late and lost the first round of the American luxury SUV battle to the Lincoln Navigator—Cadillac's entry bowed in 1999, while the Lincoln arrived the prior year. The Escalade felt half-baked, too—it was a scant cosmetic makeover of the then-new GMC Yukon Denali, with a re-molded front end that didn't look like the product of either brand. A 255-hp V-8 teamed up with a 4-speed automatic and standard four-wheel drive. GM sold this Escalade only for the 1999 and 2000 model years. Leather trim, an upmarket stereo, and badges were about all that separated this version from its Chevy and GMC cousins.

The Escalade took a pass on the 2001 model year entirely, with Cadillac instead focusing on a 2002 makeover for its largest model. The plan worked, as it emerged with three body styles, a far better-knit kit of Cadillac styling cues, and a swank interior with a new third-row seat. Rear-wheel-drive versions came in 2002 as well, joining the logical but curious Escalade EXT—an odd hybrid of four-door SUV and pickup, with a midgate separating the two for cargo flexibility.

The 2003 model year brought the longer ESV edition, giving the Escalade a size competitor for GM's own Suburban XL 'utes. A Platinum trim package emerged in 2004. A 285-hp, 5.3-liter V-8 came in most versions for the first two years; a new engine with 10 more hp arrived in 2004. For the entire run of this generation, a 345-hp, 6.0-liter V-8 came as an option on some versions. This generation shared mechanicals with the entire GM truck and full-size SUV lineup, but also the new Hummer H2 'utes.

A new Escalade hit the road in the 2007 model year, with ESV and EXT editions coming with the standard-length Escalade. GM pressed the introduction of the trucks ahead of schedule—but sales still fell, and fell hard once the country slipped into a deep recession in 2008. Very crisp, angular styling looked quite handsome on all versions, and lots of chrome made the Escalade a styling standout—whether you agree with its take on luxury or not. Amazing power emanated from the 6.2-liter V-8, and a special all-wheel-drive system and an 8-speed automatic were notable improvements.

Magnetic Ride Controls quelled the worst road impacts, while the optional 22-inch wheels could add road noise to the otherwise calm cabin. The seating was quite comfortable, but the third row wasn't so easy to reach, and the seats didn't quite fold flat—but Escalade ESVs hardly had to worry with their tremendous interior space, with or without the third-row bench folded.

A new Escalade Hybrid SUV was added to the lineup for 2009. With a price of nearly $75,000, it was extremely slow-selling, but the hybrid technology and its advanced two-mode transmission improved fuel economy from miserable mid-teens to the respectable low-20-mpg range. All versions of the Escalade could be fueled with E85 ethanol blend.

Otherwise, the Escalade changed very little over the last several model years of this generation.

New in 2015, the next generation was a heavily revamped and restyled continuation of the previous version. It was a crisp, handsomely styled SUV that made no bones about its size, going so far as to highlight it with full LED lighting. The cabin was filled with leather and suede and open-pore wood, with the front row dominated by Cadillac's CUE touchscreen interface.

Power came from a 420-hp, 6.2-liter V-8 engine that made 460 pound-feet of torque, paired with a 6-speed automatic transmission for some 2015 models, and upgraded to an 8-speed on vehicles built later in the model year and continued through 2017.

Cadillac's sophisticated Magnetic Ride Control suspension was standard, and a new four-wheel-drive system had a two-speed transfer case. The Escalade could tow as much as 8,300 pounds, depending on configuration.

Although this Escalade had a bit less interior room than the previous model, overall comfort improved. The rearmost row of seats could be folded independently with power assist.

Prices started in the low-$70,000 range and can escalate quickly past $100,000. Some of the price increase came from added safety gear, including forward-collision warnings, blind-spot monitors, and adaptive cruise control. Also offered was a rear entertainment system that played Blu-ray movies on a single 9.0-inch screen that descended from the roof on the standard Escalade, or on two separate 9.0-inch screens on the longer ESV model.

As a running update, the Escalade received a new, cleaner grille design with Cadillac's new wreathless crest adorning it, midway through the 2015 model year. The brand's new logo sat higher up on the chrome blades than did the more circular logo before it, giving the Escalade an even more modern look. It also received the aforementioned 8-speed automatic, as well as the OnStar 4G LTE in-car wi-fi with an included 3 GB/three-month trial. The LTE connection also sped up the connection to OnStar services.

For 2016, the Escalade added Apple CarPlay to its CUE infotainment system.

Aside from the addition of a trick rearview mirror that's actually a monitor linked to a high-resolution backup camera, the Escalade stood pat for 2017. The 2018 Escalade adopted a 10-speed automatic transmission, which helped fuel economy slightly and made the 6.2-liter V-8 feel stronger. For 2019, the Escalade lineup gained a style-oriented Sport Package—an oxymoron if we ever heard one. Changes were minimal in 2020, in advance of the new 2021 Escalade.

Rate and Review your car for The Car Connection! Tell us your own ratings for a vehicle you own. Rate your car on Performance, Safety, Features and more.
Write a Review
2016 Cadillac Escalade 4WD 4-Door Platinum

The "new and improved" 8 speed transmission is awful!

this is my second Escalade and the quality and luxury of the vehicle is much improved. Last Escalade was very reliable and never required repairs, if this one is as good it will be a fantastic addition to my 4-car garage.

2021
Nominated for Best Luxury Car, Best Looking Car
See the winner »
2021
The Car Connection
See The Winner and Nominees »
7.0
Expert Rating
Most Recent Rating
Ready to connect with local dealers?
Get Your Price