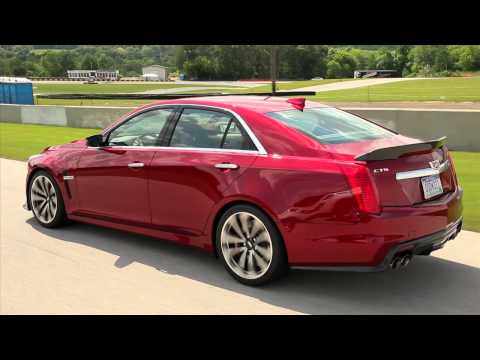 The Cadillac CTS-V is a high-performance sedan that adds a fire-breathing V-8 to the four-door mid-size sedan's frame. Cadillac will drop the CTS-V after the 2019 model year.

The CTS-V has been offered in a wide range of body styles, including a wagon or coupe. The latest iteration is sedan-only, and it's a heat-seeking four-door that faces off against some of the best vehicles in the world.

With the CTS-V, Cadillac has a rival for sport sedans such as the BMW M5, the Mercedes-AMG E63, the Audi RS7. The Cadillac stands alone as the best-performing American luxury sedan.

In 2015, the third-generation CTS-V was introduced, this time offered—initially, at least—only as a four-door sedan. Updates for 2017 are relegated to a trick new rearview mirror that's actually a high resolution display for a camera integrated into the car's trunk, and a new Carbon Black package that adds an aerodynamic body kit composed of lightweight woven carbon fiber.

The latest CTS-V packs the Chevrolet Corvette Z06's drivetrain, with only minor modifications, generating 640 horsepower and 630 pound-feet of torque. Based on the latest version of the CTS, the Cadillac CTS-V offers a more aggressive design, greater luxury, and extensive performance enhancements.

Among the upgrades are third-generation magnetorheological dampers, a Cadillac-tuned take on the Performance Traction Management system that provides stability and control in environments ranging from snow and ice to all-out attacks on lap times at the track. An electronically actuated limited-slip differential, a quick-shifting 8-speed automatic transmission (with paddle shifters), and high performance tri-compound tires are also included.

The CTS-V was first launched in the Cadillac lineup in 2004. Based on the CTS sedan, but with much more horsepower, a more advanced and track-tuned suspension, upgraded brakes, and unique aerodynamic and interior styling elements. The CTS-V rapidly gained credence as a serious performance/luxury sedan.

Rated at 400 hp from its original 5.7-liter LS6 engine, updated in 2006 to a 6.0-liter LS2 V-8 engine also rated at 400 hp, the large and relatively heavy (3,850 pounds) sedan nonetheless offered very brisk acceleration, reaching 60 mph in just 4.6 seconds and reaching a top speed of 163 mph. A 6-speed manual transmission was the only offering in the first-generation CTS-V. Over its four-year model run, the CTS-V gained various trim and appearance options, but stayed essentially the same mechanically aside from the engine change.

The second-generation CTS-V launched in 2009, based on the then-new CTS sedan, offering a new 6-speed automatic transmission in addition to the 6-speed manual and an all-new engine. The new engine was a 6.2-liter LSA V-8, supercharged to reach 556 hp and 551 lb-ft of torque. Acceleration improved significantly with the added power, shrinking the 0-60 mph time to 3.9 seconds and raising the top speed to 198 mph.

The second-gen car used an adaptive suspension with magnetorheological dampers, which does an excellent job of retaining comfort and sport attributes simultaneously. A set of brakes from Brembo brought the 4,250-pound car to a halt with immediacy. The second CTS-V also improved on its predecessor's cabin, with Alcantara accents throughout, available sport seats, and racing-inspired details to go along with the usual Cadillac luxuries.

A wagon version of the CTS-V was introduced in 2010, as a 2011 model. Sharing the same core mechanical underpinnings with the sedan, the CTS-V Sport Wagon was one of the few truly high-performance luxury wagons available in the United States.

The CTS-V Coupe also arrived in 2010 as a 2011 model, sharing the same wheelbase and core mechanical elements as the sedan, but with a much more dramatic, low-profile look, including a more raked windshield and lower roofline. The CTS-V Coupe otherwise shared roughly the same key performance statistics with the sedan and wagon.

Although the CTS sedan was new for 2014, the existing CTS-V models carried over for one more year as 2014 models. For the 2015 model year, only the coupe model was carried over.

Rate and Review your car for The Car Connection! Tell us your own ratings for a vehicle you own. Rate your car on Performance, Safety, Features and more.
Write a Review
2018 Cadillac CTS 4-Door Sedan

In terms of driving and handling, the CTS is razor sharp, with communicative steering and minimal body lean through tight corners. I chose the 3.6 liter V-6, with 335 horsepower, and have not been disappointed. Dropping the hammer pushes you into your seat with a sweet exhaust note.

Finally, the styling. Styling is what has really drawn me to Cadillac (my other car is a CTS Sportwagon!), and the latest CTS, along with the CT6, is probably the finest iteration of its "Art & Science" design theme. The sedan's sharp angles and creases, light tubes on the front corners, and intricate vertical LED taillights, all channel Cadillac's heritage in a most elegant way. No one could mistake the CTS for anything other than an American luxury sedan of the highest order, and it turns heads.

In sum, I find the 2016 CTS to be a total blast. I give the car my highest recommendation. + More »
people found this helpful.
Was this review helpful to you? Yes
See More Reviews