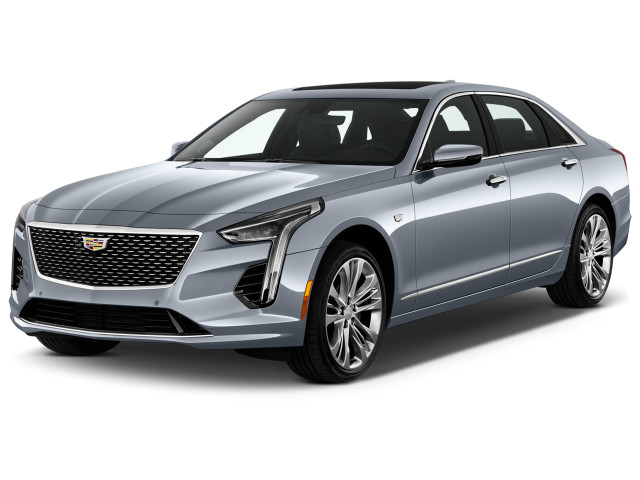 The Cadillac CT6 is a mid-size luxury sedan that's full of tech and luxury features. While it's not the biggest car in the automaker's lineup, it's the thought-leader for now; no other Cadillac is equipped with its features.

The CT6 is bigger than the CTS and ATS sedans, but not quite as large as the XTS. Its lightweight construction gives it a footprint on par with mid-size sedans from Mercedes-Benz and BMW, but its interior space is closer to the full-size offerings from both automakers.

In 2020, Cadillac said it would end production of the CT6.

Other than the new engine and transmission, five powertrains are offered. Three are conventional engines: a  3.6-liter V-6, a turbocharged 2.0-liter inline-4, and a twin-turbocharged 3.0-liter V-6. The latter engine generates 404 horsepower and 400 pound-feet of torque. All three deliver power through an 8-speed automatic transmission.

The CT6 Plug-In model uses a high-efficiency version of the 2.0-liter engine paired to a two-motor hybrid transmission similar to that in the Chevrolet Volt, with a 17.6-kilowatt-hour lithium-ion battery pack delivering 31 miles of EPA-rated electric range. Total output of the powertrain is also 335 hp, but the battery infringes on trunk space to a considerable degree. The plug-in is the only model not made in the U.S.; it's imported in low volumes from China, destined for California and a few other states where plug-in electric cars have proven popular.

A new feature of the CT6 is auto brake hold, which aims to reduce stop-and-go traffic fatigue by holding the car in place when the driver releases the brake; the function also aids starts on steep hills. It is new to GM vehicles but has been offered by other luxury automakers for quite some time.

On the technology front, a 10.2-inch high-definition screen sits front and center in the dash, offering Cadillac’s CUE infotainment interface for control of the car’s main systems. A touchpad control in the center console offers an alternative to the haptic-response touchscreen for inputs. Wireless phone charging, 4G LTE with wi-fi hotspot, and OnStar are also included.

Safety features are also high-tech in the CT6, with a surround-view camera system eliminating blind spots, an night vision system that can identify people and large animals among other obstacles, a rearview camera that uses the full surface of the rearview mirror to deliver a combined image that enhances visibility for maneuvering, and a surround-view recording system that triggers when the vehicle’s alarm is activated.

An available rear seat infotainment system offers 10-inch screens which retract into the setbacks; a four-zone climate control system uses a secondary full heating/cooling system to deliver personalized temperature control; the air in the cabin is purified by an ionizing system; and a Bose Panaray audio system routed through an astonishing 34 speakers.

The CT6 was new for the 2016 model year. A plug-in hybrid version was added halfway through the 2017 model year, and the main change for 2018 was the addition of the SuperCruise option, an advanced version of adaptive cruise control that keeps the car centered in its lane and permits hands-off operation under certain circumstances. Other 2018 changes were limited to a more capable Park Assist function and new paint colors.

The 2019 model year saw subtle styling updates to the front and rear fascias that bring the CT6 more in line with newer Cadillac models. The big change? A new 4.2-liter twin-turbo V-8 with 550 hp in a top V-Sport model, or 500 hp in the CT6 Platinum.

Be the first one to write a review on 2020 Cadillac CT6
Rate and Review your car for The Car Connection! Tell us your own ratings for a vehicle you own. Rate your car on Performance, Safety, Features and more.
Write a Review