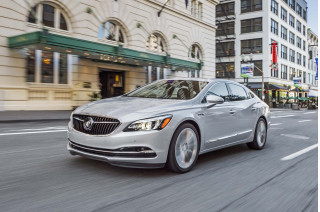 The Buick Lacrosse is a large four-door sedan that's large, long, and quiet in base spec, but adopts a sporty flair in upper trims.

With the Lacrosse, Buick has a vehicle that competes directly with cars such as the Acura TLX, Volvo S60, Lincoln MKZ, and Lexus ES.

The 2019 Lacrosse returned with no changes for the new model year.

The new Buick Lacrosse arrived for the 2017 model year riding on a new platform and boasting svelte styling inspired by the Avenir concept that debuted at the 2015 Detroit auto show.

Under the hood, the 2017 Lacrosse gets the latest version of parent company GM's 3.6-liter V-6 making 310 horsepower and 282 pound-feet of torque and adding start/stop technology to save fuel at stop lights. Buick's first application of GM's 8-speed automatic transmission was the only gearbox on offer in 2017, but a 9-speed replaced it for 2018. Additionally, the 2018 model added a 194-hp mild hybrid 4-cylinder powertrain as the base engine.

The new car is marginally longer and lower than the 2016 model, but the wheelbase and front and rear track grow considerably, opening up more cabin space and giving the car a more stable footprint. It comes in at a lithe 300 pounds lighter, thanks to more high-strength steel in the body and lighter but more effective sound-deadening materials.

The independent rear suspension changes from a four-link to a five-link setup and the front suspension is MacPherson struts in lower end models and GM's HiPer Strut design in higher line versions. Adjustable dampers also will be offered.

Inside, the 2017 Lacrosse is completely redesigned and features a new 8.0-inch center touchscreen with the latest generation of the IntelliLink infotainment system. This version uses fewer hard buttons and comes with Android Auto and Apple Car Play.

For 2018, the Lacrosse was updated heavily, a surprise for what's only a two-year-old vehicle. A new base powertrain offers mild-hybrid technology; a 9-speed automatic is now offered, and all-wheel-drive availability has been expanded. At the top of the range, Buick's added a Lacrosse Avenir trim level.

One of the first vehicles to usher in the latest era of Buick style and size, the Lacrosse effectively replaced the old LeSabre sedan when it was new in 2005. That first version was quite different from today's car. It was much like a smaller version of the Lucerne, epitomizing the old American view of a floaty, conservatively styled luxury Buick. Powered by a 3.6-liter V-6, a 3.8-liter V-6, or a 5.3-liter V-8, the first-generation Lacrosse was neither sporty nor fuel efficient, though the V-8 model packed some solid highway muscle. In any of three trims—CX, CXL, and CXS—the car was front-drive only and offered features that came up somewhat short of the competition.

The second-generation Lacrosse was a completely different prospect, with a striking design and much-improved materials, build quality, features and ride. Introduced to the market in 2009 as a 2010 model, the new Lacrosse quickly garnered praise for its looks. It featured a new range of engines, including a 3.0-liter V-6 and a 3.6-liter V-6. A 2.4-liter 4-cylinder was added in the second year of production to grab great fuel-economy figures for Lacrosse, while the V-6s were meant to provide some thrust for the large sedan.

Initially, the second-generation Lacrosse was available in the same CX, CXL, and CXS as the first generation. The base CX featured standard OnStar and a 255-hp 3.0-liter V-6 engine. The CXL stepped up with more equipment, while the CXS got the 280-hp 3.6-liter V-6. The all-wheel-drive Lacrosse was only available in CXL trim with the 3.0-liter V-6. All of these Lacrosse sedans featured a 6-speed automatic transmission.

For 2011, GM axed the 3.0-liter V-6, leaving the more powerful and similarly efficient 3.6-liter V-6 as the lone step-up engine. It remains the optional engine to this day, now making 304 hp. In the same year, the 182-hp, 2.4-liter 4-cylinder became the Lacrosse's base engine. It was a stopgap measure, lasting just a year until the Buick Lacrosse eAssist was introduced for the 2012 model year.

GM's eAssist 4-cylinder in the Lacrosse was a mild-hybrid that made use of a belt-driven starter/generator. It was more refined than the unassisted 4-cylinder it replaced, provided more power and also returned better mileage figures, according to the EPA: 25 mpg city, 36 highway. The electric motor allowed the engine to shut off at stoplights and restarts it when the driver lifted off the brake, and also provided some boost when accelerating. The 4-cylinder engine was only available with front-wheel drive. The much higher fuel-economy gains of full hybrids like the Honda Accord Hybrid competed against eAssist's milder gains, and the GM system was dropped.

Buick's IntelliLink touchscreen connectivity system was new to the Lacrosse lineup for 2012 and combined phone and media-player connectivity with the capability to stream audio through the Pandora or Stitcher apps; it was made standard for 2013. At the same time, Buick integrated the navigation system with IntelliLink, and topped off the GPS' features list with SiriusXM Travel Link services, including real-time traffic reports.

For the 2014 model year, Buick gave the Lacrosse a mild facelift, added LED running lights and taillights and reshaped the hood and dash. New interior trim options included an Ultra Luxury package with wood and lightly treated leather, while a Bose audio system became an option. The powertrains were carried over, while 20-inch wheels and tires were a new option. The IntelliLink system was also upgraded to add more functionality.

For 2015, the Lacrosse added modern technology such as a standard rearview camera and Siri Eyes Free to go with the IntelliLink system. The 2015 Lacrosse also added a 4G LTE connection, which includes the ability to broadcast a wi-fi data connection inside the vehicle for an extra monthly fee.

Upgrades for 2016 were minimal. They included a new 8.0-inch screen for IntelliLink with two USB ports and more intuitive controls.

Rate and Review your car for The Car Connection! Tell us your own ratings for a vehicle you own. Rate your car on Performance, Safety, Features and more.
Write a Review
2018 Buick Lacrosse 4-Door Sedan Premium FWD

This is one great car!