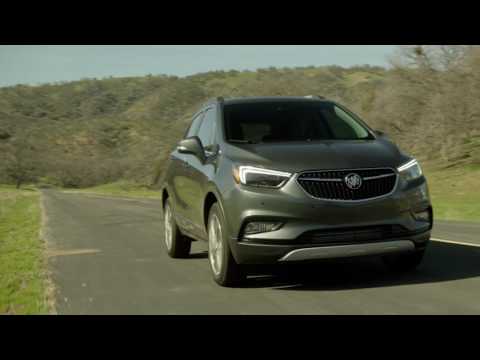 The Buick Encore is the smallest crossover SUV available from the automaker.

The Encore was new in 2013, and received an update for 2017. At its inception, it was something of a revelation: an upmarket, subcompact crossover and it has been a hit for Buick.

For the 2020 model year, Buick added a new Encore GX that eventually will replace the Encore. A new platform underpins the larger new Encore GX, with substantial refinements to its ride and powertrain.

With the Encore, Buick has rivals such as the BMW X1, Mini Countryman, Audi Q3, and Mercedes-Benz GLA, all of which are more expensive and fancier than the little Buick. Mainstream competitors include the Honda HR-V, Mazda CX-3, Fiat 500X, and Jeep Renegade.

Buick aims the Encore at urban families who want a vehicle that scoots around town, is easily maneuverable, and fits into tight parking spots. At just 168.4 inches long, with a wheelbase that's 100.6 inches, the Encore has a footprint a little larger than those of subcompact cars like the Chevy Sonic and Honda Fit, but it is considerably taller. Passengers sit at crossover height, giving good forward visibility and little of the sense of vulnerability that much lower-riding cars of that size can induce.

The Encore's hallmarks are luxury, comfort, and interior appointments. It seats four adults comfortably, while the back seat can accommodate three across if those folks are all smaller or willing to get cozy. The Buick Quiet Tuning measures—extra sound deadening including an acoustically treated headliner, as well as active noise cancellation—make it one of the more peaceful subcompacts for traveling. Cloth/synthetic leather or leather seats come in rich, warm colors, and interior trims mostly look and feel luxury-grade.

The Encore is powered by the same 1.4-liter turbo-4 that's available in Chevy's Cruze and Sonic, as well as the Trax crossover. It puts out 138 horsepower and 148 pound-feet of torque. An uprated version that is available in Sport Touring models adds direct injection, 15 more horsepower, and 29 more lb-ft of torque. The extra power makes merging and passing easier, and it offers more pickup from a stop as well.

To make it more of a Buick, the Encore has a cushy suspension. This tall and small crossover is not terribly sporty, instead focusing on decent fuel economy. The Sport Touring model has firmer suspension settings for better handling.

Safety is up to the standards set by recent GM small vehicles like the Buick Verano, Chevrolet Cruze, and Chevy Sonic. The Encore has 10 standard airbags, while forward collision warning, front and rear park assist, and lane-departure warning systems are available, along with a standard rearview camera.

The Encore netted top "Good" ratings in all of the IIHS tests. In federal testing, the small Buick earned a five-star overall rating for both front- and all-wheel drive versions.

Available features include remote vehicle start, dual-zone climate control, and rain-sensing wipers. Just as in most hatchbacks or crossovers, the rear seats fold down, to make 48.4 cubic feet of cargo space available (or 18.8 cubic feet with them up in place). A few items remind passengers of the Encore's less luxurious origins, including "power seats" where only the bottom portion is powered—the backrest adjustment is done via a standard lever—and the same control stalks as found in a Chevy Sonic.

The Encore was mostly unchanged for 2015, with the exception of OnStar's new 4G LTE data connection being made available; the system has the ability to create a wi-fi network inside the car and also speeds up communication to OnStar's systems.

For 2016, Buick added the Encore Sport Touring with the uprated engine. The Sport Touring also has a rear spoiler, its own 18-inch wheels, and engine stop/start.

A 2017 updated involved the styling and interior. The front end gained a new grille that lost the waterfall look and added a chrome strip with a wing shape flanked by available LED headlights with a sharp lighting signature. The overall effect softened up the Encore’s steeply raked nose and blended it better with the rest of the body. At the back, the Encore’s taillights went LED, too.

The cabin is where the more important changes took place. The dash looked less cluttered than before. The center stack was cleaned up and pared free of dozens of buttons, as the Encore adopted a new infotainment system. The setup featured an 8.0-inch touchscreen with Apple CarPlay and Android Auto. The Encore also gained a 4.2-inch display screen between its gauges, as well as keyless ignition. Those updates carried over into 2018.

After a modest update in 2017, the 2018 Encore was essentially left alone aside from a newly optional air ionizer and a capless fuel filling system. The 2019 Encore is unchanged from the year before it.

Rate and Review your car for The Car Connection! Tell us your own ratings for a vehicle you own. Rate your car on Performance, Safety, Features and more.
Write a Review
For 2017 Buick Encore

Great small SUV,just the right size for my use.this is my 2nd Encore

Would highly recommend to anyone looking for a well appointed and comfortable small SUV. Behaves like a much bigger automobile
people found this helpful.
Was this review helpful to you? Yes
2016 Buick Encore AWD 4-Door Leather

I hate my Buick.

I have 2014 it has class, and rides so nice I get a lot of compliments the chrome wheels, this is my 4th Buick I have owned and looking forward to the others to come.
people found this helpful.
Was this review helpful to you? Yes
See More Reviews