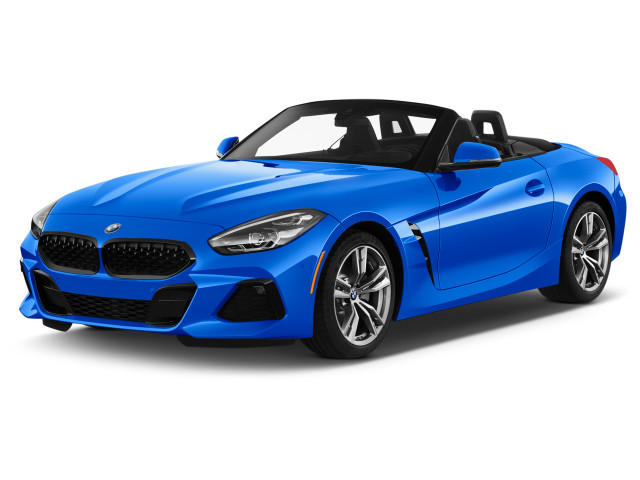 The BMW Z4 is a rear-drive, two-seat convertible sports car. An evolution of the former Z3, the Z4 returned for the 2019 model year after a three-year hiatus.

With the Z4, BMW has a rival for the likes of the Porsche 718 and Mercedes-Benz SLC-Class.

With the Z4, BMW has developed a sports car that might not exist if the automaker hadn't paired up with a cross-planet rival. The Z4 shares a platform with, and has been jointly developed alongside, the 2020 Toyota Supra.

The new Z4 rides on an independent suspension, available with adaptive dampers for a smoother ride. Electric power steering has variable assist, and an M Sport package adds stouter brakes, bigger wheels and tires, and a torque-vectoring differential.

The Z4's new style owes much to the prior convertible (and Z4 coupes from the past). Its wide twin-slot grille sits over large air intakes; deeply stamped doors aim their cutlines at the front wheels; thin LED taillights rest on a mock rear end diffuser. Inside the Z4 wraps intently around the driver, with a wide touchscreen atop a dash that can wear colorful leather trim and stitching, and a console that comes in black trim or in a subtle textured aluminum.

The latest Z4 is longer and wider than the prior car, but the driving position is offset around its wide transmission tunnel. Interior space is adequate and the sport seats offers lots of support, but the Z4's trunk is small—shallow and wide—but good enough for a couple of soft-side bags and a convenient pass-through for long items such as skis.

For 2021, it carried over mostly unchanged.

The original BMW Z4, introduced for 2003, wasn't that much larger than the Z3 it replaced, but it was much more refined and luxurious. It made a tremendous leap design-wise, graduating from British roadster disciple to something much more complex, inside and out. Originally, the Z4 was sold in 2.5i and 3.0i variants, with 184 horsepower and 225 hp respectively, but a mid-cycle update in 2006 brought more powerful engines. Models from 2003 through 2005 could have an optional SMG gearbox, which was never well received and didn't function as well in the Z4 as it did in several of BMW's other cars of that era. The rest of the 2003-2008 models were offered with excellent manual or Steptronic automatic transmissions. The 2006-2008 models were available in a curvy, nicely proportioned hatchback coupe body style that added a little cargo capacity, but coupes weren't that much quieter inside than convertibles were with the top up. During that period, there was also the Z4 M, a model powered by a version of the 3.2-liter inline-6 that was also used in the contemporary M3, with output down slightly to 330 hp.

With the introduction of the second-generation Z4 in 2009, BMW moved production from Spartanburg, South Carolina, to Regensburg, Germany. The second-generation Z4 was markedly different from the first. This time around, BMW's small convertible dropped the Miata-fighting tack and grew into a more luxurious, more powerful car. Offered only as a convertible, it had a folding hardtop instead of a cloth roof—better to compete with the Mercedes-Benz SLK. There were also a lot of visual and technological influences from the limited-run Z8 roadster. The second-generation Z4 was also a more upscale affair, with a greater focus on comfort than on driving dynamics or all-out power. The price went up with all of those changes, as well.

BMW began offering an almost-M version of the car in 2011. The sDrive35is features the same turbocharged inline-6 as the normal sDrive35i, but it had the boost cranked up by 35 extra hp, for a total of 335. The cars appended with "is" also received a specially tuned exhaust and scads of M parts, including an adaptive suspension, unique wheels, a body kit, a sport steering wheel, and sport seats.

In 2012, BMW introduced a new turbocharged 2.0-liter 4-cylinder engine in the sDrive28i model, replacing the previous sDrive30i. Despite the smaller displacement, this engine generates nearly as much power while returning much better fuel economy. For the 2013 model, BMW sweetened the Z4's feature set by adding power front seats (with driver-side memory), dual-zone automatic climate control, a universal garage-door opener, and ambient lighting to the standard feature set—all while lowering the price.

For the 2014 model year, BMW added a more feature-packed ConnectedDrive infotainment system with advanced safety and connectivity features, as well as new exterior and interior appearance elements, a new wheel design, and a new chrome "swoosh" on the front fenders.

Light on substantive updates, the Z4 moved into 2015 with a new design package called Pure Fusion Design. The package includes a Sparkling Brown Metallic exterior paint, which is offered exclusively with an Ivory White and Burnt Sienna leather interior.

The only change of note for 2016 was the addition of sport seats to the base model.

BMW ended production of the second-generation Z4 in mid-2016.

Rate and Review your car for The Car Connection! Tell us your own ratings for a vehicle you own. Rate your car on Performance, Safety, Features and more.
Write a Review
2016 BMW Z4 2-Door Roadster sDrive28i

Sexy styling with refined performance. Sport package worth every penny. Two cars in one. European delivery next!
people found this helpful.
Was this review helpful to you? Yes
2008 BMW Z4 2-Door Roadster 3.0i

BMW is worthy of being the Ultimate Driving Machine.

Very comfortable roadster, have been on several 3000 mile roadtrips never a problem with 140k + miles on th

I have owned several BMW do my own basic maintenance. I have never been stranded with one of these cars i think they are the best value on the road.
people found this helpful.
Was this review helpful to you? Yes
See More Reviews