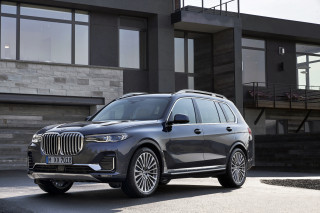 The BMW X7 is the German automaker's three-row crossover SUV and the largest vehicle available with a roundel.

Based on the smaller BMW X5, the X7 has bold styling, a longer wheelbase, and a standard third row to set it apart from its smaller sibling. The X5 is available with three rows, however the third row in the X5 is much smaller than the X7's and is meant for only occasional duty.

With the X7, BMW finally has a direct rival for the Mercedes-Benz GLS-Class and Audi Q7, among other high-end luxury SUVs.

Changes have been limited to the loss of Harman Kardon audio and wireless smartphone charging, due to the global chip shortage.

The BMW X7 is available with a choice of a turbo inline-6 or twin-turbo V-8 paired to an 8-speed automatic transmission with standard all-wheel drive.

The X7 is rated to tow up to 7,500 pounds with the optional trailer hitch.

The X7 comes standard with seating for seven—two in the third row. Optional captain's chairs likely to be popular with X7 buyers drop its capacity to six but provide a walk-through to the third row. With the second and third rows folded flat, the X7 can accommodate nearly 90 cubic feet of cargo.

The X7 comes well-equipped with luxuries such as heated seats and armrests and a 12.3-inch configurable screen for its instrument cluster and a 12.3-inch touchscreen for infotainment with advanced voice controls and available gesture controls. BMW offers Harman Kardon and Bowers & Wilkins audio systems as an upgrade over a standard stereo system.

All X7s ride on an air suspension that's height adjustable. An optional suspension connects to a forward-facing camera system that watches the road ahead and adjusts ride quality ahead of pavement imperfections.

The X7 sits relatively high off the ground with 8.7 inches of running ground clearance. Its suspension can be raised for better off-road clearance, but it's not likely to be a proper mud plugger like the Range Rover.

With distant relatives in the SUV world that include the new Rolls-Royce Cullinan, the X7 still has room to grow. It's likely BMW will offer plug-in hybrid versions within a couple of years, and ultra-luxury models are sure to follow.

The X7 is built alongside BMW's other SUVs—the X3 and X4, X5 and X6—at the automaker's assembly facility in Greer, South Carolina.

Be the first one to write a review on 2023 BMW X7
Rate and Review your car for The Car Connection! Tell us your own ratings for a vehicle you own. Rate your car on Performance, Safety, Features and more.
Write a Review