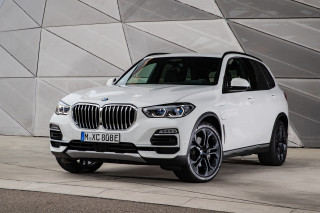 The BMW X5 is a luxury mid-size SUV that paved the way for many others like it.

It's a rival for vehicles such as the Mercedes-Benz GLE Class, Range Rover Sport, and Porsche Cayenne.

The newest X5 made its debut for the 2019 model year with more creature comforts, more technology, and more efficient powertrains in its future.

Built in BMW's U.S. factory in Greer, South Carolina, the X5 is considered by the automaker to be a mid-size "sports activity vehicle."

BMW launched the 2019 X5 at the end of 2018, and gave it a carefully modulated version of the same look that has graced the SUV since it was new. The silhouettes haven't changed, but the 2019 X5 gets a bigger twin-nostril grille and slimmer headlights, as well as a gentle upkick at the shoulder where it meets the tail. The cabin's become quite sophisticated, with options for cut-crystal shifter and knob caps and supple Merino leather.

This time around, BMW fits standard adaptive dampers to every X5. It's also made air springs an option, and on that configuration drivers can choose an off-road package with underbody protection, a first for the South Carolina-built SUV. Without the air suspension, a sport package adds better tires, a lower ride height, and other badging and bodywork.

An inch longer than before, with a 117.1-inch wheelbase, the X5 has very good interior room, as usual. Front multi-adjustable seats present an upgrade over the base seats in front, and BMW's configured the X5 with a split rear tailgate for easy cargo loading.

Automatic emergency braking is standard across the line, while Apple CarPlay commands a monthly charge after the first year of service. Major upgrades include leather upholstery, Bowers & Wilkins audio, and open-pore gray wood trim for the cabin. An X5 M edition is sure to come soon, as is a replacement for the related X6.

For 2020, BMW made smartphone compatibility standard, stopped charging for Apple CarPlay, and added a 523-hp version of the twin-turbo V-8.

In 2021, BMW dropped the xDrive50i model and replaced it with a plug-in hybrid xDrive45e. Satellite radio and Android Auto compatibility became standard. A mild-hybrid system was grafted onto the 40i models, and the off-road package was dropped. For 2022, BMW limited availability of the 12.3-inch touchscreen due to the chip shortage, and launched a new Black Vermillion special edition.

The third-generation BMW X5 that preceded the new model didn't change the X5's smart silhouette much. Sculpting down the sides balanced out the big front air intakes. The cabin featured a horizontal design trimmed in black leatherette or neutral leathers.

The least-expensive X5 of this era was powered by BMW's tried-and-true turbocharged 3.0-liter inline-6, making 300 horsepower in both the rear-drive sDrive35i and all-wheel-drive xDrive35i. A diesel was again available in the xDrive35d. There still was a V-8 option in the xDrive50i, which was powered by a twin-turbocharged 4.4-liter engine making 445 hp. The new plug-in hybrid's engine and electric motor teamed in this generation to produce 308 hp, and the motor could power the vehicle alone for up to 13 miles.

All models had electric power steering, which was very light and offered only hints of the feedback the older models supplied. A smooth 8-speed automatic improved efficiency, but also included a more aggressive "Sport" mode for those who wanted it. There also was an available adaptive suspension setup, as well as air springs for the rear that werebest for towing applications.

The X5 of this era could seat up to seven. The front seats weren't BMW's best efforts, but the second-row seat could be split 40/20/40 for more flexibility, and each section was adjustable individually for rake. The optional third-row seats had an "easy entry" function but little space. The cargo hold could be opened from the keyfob or the driver's seat; the lower piece dropped like a truck tailgate, while the upper glass powered open like a minivan hatch.

This X5 was long on advanced safety technology, including a lane-departure warning system and a pedestrian collision-avoidance system with automatic braking. A Traffic Jam Assistant maintained following distance and kept the vehicle at the center of its lane by providing steering input. The NHTSA gave the X5 a five-star rating overall for safety and it received top "Good" ratings in the categories it has been rated in by the IIHS. The agency also gave a "Superior" score to the X5 for front crash prevention, when optionally equipped.

There was only one notable change for 2016: the addition of a plug-in hybrid. Prices for the 2016 BMW X5 ranged from about $55,000 to more than $80,000 when trimmed out with Dakota leather, Bang & Olufsen audio, a rear-seat entertainment system, and more.

For 2017, BMW gave the X5 a touchscreen infotainment system to complement the sometimes-finicky iDrive puck. For the 2018 model year, relatively few and minor changes were made.

BMW also offered the high-performance X5 M. Powered by an upgraded version of the twin-turbo 4.4-liter massaged by M, the X5 M once again brought a torque-vectoring rear differential (which was otherwise unavailable elsewhere in the X5 lineup). That made it a real track monster and plenty of fun in snowy weather. It received a more aggressive exterior, of course. Also available was the X6 M for those who just don't like all of that utility in the back of the X5.

The BMW X5 has been around for a decade and a half now. When it was developed, BMW also owned Land Rover, and because of this, the first-generation X5 shared much of its design with that legendary brand’s off-roaders, as well as the BMW 5-Series sedan. The original X5 also sported a range of engines, including a 3.0-liter inline-6 and a number of 4.4-liter to 4.8-liter V-8 engines paired with 5- or 6-speed automatic transmissions.

For the second generation, BMW designed a new platform, with a new range of engines—including a diesel and a hybrid—and a new high-performance X5 M, while a new 6-speed automatic transmission that was used in all models.

Model names for the BMW X5 lineup were changed to reflect more iterations of the 'ute. With the second generation, the new names adopted a different format: the X5 xDrive30i, for example, denoted the standard all-wheel drive (xDrive) and a 3.0-liter inline-6. In addition to that model, BMW offered a 3.0-liter turbodiesel as the X5 xDrive35d, a 4.8-liter V-8 engine in the X5 xDrive48i, and a 555-hp, twin-turbo 4.4-liter V-8 engine in the new X5 M. In 2011, the standard models received engine upgrades and name changes: the 6-cylinder was fitted with a turbo and the xDrive35i name, while the V-8 model received a pair of turbos and the xDrive50i badge.

All X5s of this generation featured the same basic five-seat interior layout, with leather upholstery, BMW’s iDrive infotainment system, advanced stability and traction electronics, plus a wide range of optional upgrades. The X5 M offered extreme performance with a big price tag to match—base prices hit $85,500—delivering near-sports car performance with near-supercar power. The X5 xDrive35d was one of the few diesel luxury SUVs on the market, and it scored with 265 hp and a 26-mpg EPA highway rating.

For 2012, BMW didn’t make any major changes to the X5 range, aside from minor appearance tweaks. Changes in the 2013 BMW X5 included a temporary end to the diesel model, some cosmetic updates, and a new M Performance Package, available on X5 xDrive35i and xDrive50i (with M Sport Package) models. The new M Performance upgrade added to the X5's sporty edge through engine tuning, with 15 horsepower and 30 pound-feet of torque gained in the 6-cylinder model, and another 40 hp and 30 lb-ft of torque for the V-8 X5.

Rate and Review your car for The Car Connection! Tell us your own ratings for a vehicle you own. Rate your car on Performance, Safety, Features and more.
Write a Review
2018 BMW X5 xDrive35d Sports Activity Vehicle

Built our second BMW X5. I had a 2009 before. As my 13 year old stated "Round 2 of trouble." She was right, within 1,week the Instrument Board stopped working a new Instrument board will have to be installed.
people found this helpful.
Was this review helpful to you? Yes
See More Reviews