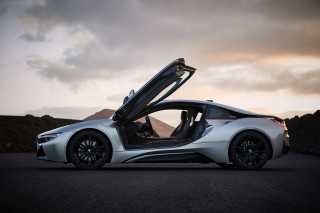 The Car Connection BMW i8 Overview

The BMW i8 is a highly unique two-door sports coupe or roadster.

With the i8, BMW looks at the future of the supercar and recasts it for an energy-conscious age. The i8 sports a 1.5-liter 3-cylinder engine shared with the Mini lineup, and combines it with batteries and electric motors for a total output of 357 horsepower.

Its lightweight construction and all-wheel-drive system serves two masters: near-sportscar performance with relatively low energy consumption. It does either task in equal turns, if that's what you're into.

The 2019 model year brings a new Spyder model to the lineup and a slightly larger battery with a small boost to overall power. The convertible model sports a small retractable-hardtop panel for open-air driving.

The i8 is the second vehicle to come out of the automaker's "i" sub-brand, following the i3 city car to market. The i8 can be considered the current technology flagship for BMW and with a base price of more than $140,000 its near the tops for entry price as well.

Though the two are related in some ways, the i8 coupe appeals to a different audience than the i3—those who want fast performance in a light car without the bulk and fuel consumption of a V-8 or V-10 engine. It's less practical than the i3 of course, and uses the weight savings and other technologies for a combination of performance and efficiency.

First unveiled as the Vision EfficientDynamics concept car at the 2009 Frankfurt Motor Show, the i8 sports coupe is fitted with two entirely separate powertrains. Up front, an electric motor draws energy from a battery pack to drive the front wheels; a 1.5-liter turbo-3 powers the rear wheels.

Two years later, the car had evolved into the BMW i8 Concept, which appeared at the 2011 Frankfurt Motor Show. The company has also shown an i8 Concept Spyder, indicating that the i8 may be offered both as a fixed-roof coupe and an open-air convertible—although the droptop version may be a few years out.

For the 2011 car, which was much closer to the production version, the original concept's diesel engine had been replaced by a gasoline engine. That is BMW's new 1.5-liter 3-cylinder engine, which is used in the new generation of Mini Coopers and pegged for a new front-wheel-drive BMW model.

The i8 uses a 7.1-kwh lithium-ion battery pack that runs between the two seats; its low placement keeps the center of gravity close to the ground for better handling. The i8 can travel at moderate speeds for as many as 20 miles on its electric charge, with a 129-hp motor driving the front wheels. Once the pace picks up, and in certain modes, the 3-cylinder engine sends 228 hp and 236 pound-feet of torque to the rear wheels. When the two power sources combine, total output reaches 357 hp, and the i8 is able to accelerate to 60 mph in a claimed 4.4 seconds. Its top speed is limited to 155 mph.

For maximum acceleration and output, both powertrains can operate in concert, making the i8 an all-wheel-drive coupe that some have called a "supercar." In this mode, the i8 becomes what engineers call a "through-the-road" hybrid, meaning that each powertrain operates a different set of wheels. Though the powertrains don't share an axle, the electric motor is tuned to make up the power lost during the gasoline engine's gear changes, ensuring a smooth and continuous flow of power.

The i8 is a very different take on a two-door sports car, and its looks are easily as groundbreaking as the power concept. The i8 borrows many cues from a recent concept that was itself an homage to the M1 supercar. There is also design language and some specific elements shared with the i3 EV that's launching alongside it, but the two are strikingly different. Where the i3 five-door is tall and large inside, with a stubby footprint, the i8 is low, sleek, and sexy, with beautiful flowing details along its flanks that culminate in a cantilevered wave over the rear haunches. The i3, on the other hand, is meant to move people and stuff in comfort throughout urban areas, packing an underfloor battery that will allow 80-100 miles of EV driving per charge.

Both cars are built in two parts: an aluminum platform holds the battery, electric motor, and other powertrain components, while a body shell made of carbon fiber-reinforced plastic sits on top. The combination is light, durable and cutting-edge. The total weight of the BMW i8 is 3,455 pounds.

To go along with the nonstandard powertrain, BMW offers the i8 in different "Worlds" instead of what would normally be referred to as trim levels. Basically design-and-options packages, the worlds act like curated paths for the buyer to follow. At the top, the Pure Impulse world includes all of the otherwise optional features, with a final price just north of $150,000.

After a brief 2014 model year, the i8 returned for 2015 with one small change: Comfort Access has now been made standard on all models. For 2016, laser headlights were made available on American-market cars.

Be the first one to write a review on 2020 BMW i8
Rate and Review your car for The Car Connection! Tell us your own ratings for a vehicle you own. Rate your car on Performance, Safety, Features and more.
Write a Review