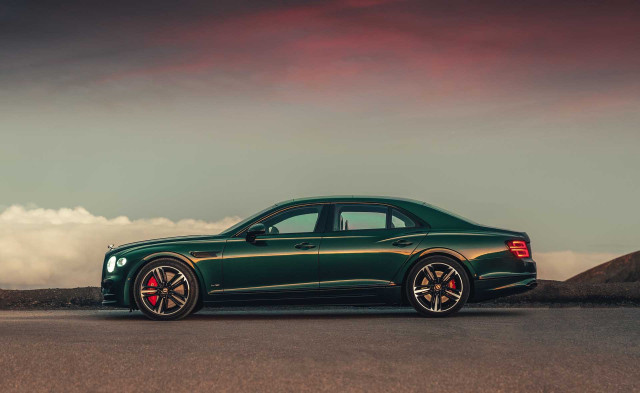 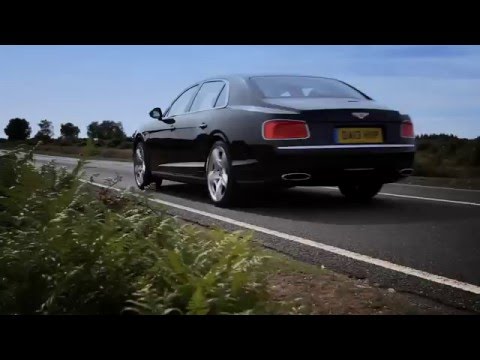 The Flying Spur is a rival for the Rolls-Royce Ghost, the Mercedes-Maybach sedan, and the Aston Martin Rapide.

The second-generation Bentley Flying Spur, launched at the 2013 Geneva Motor Show as a 2014 model, dropped the Continental name and received a new and evolutionary look that's a little sexier but still on the conservative side. The re-engineered body and chassis provide a sporty driving experience, while the cabin is quieter than ever. Its W-12 engine received a substantial output boost—to 616 horsepower and 580 pound-feet of torque—and it's now mated to an excellent 8-speed automatic transmission.

The V-8 models are lighter and a bit more nimble than their W-12-powered counterparts. With the base V8, the Flying Spur is able to hit 60 mph in 4.9 seconds and move on to a top speed of 183 mph. The V8 S cuts the 0-to-60-mph time to 4.6 seconds and raises the top speed to 190 mph. With the help of cylinder deactivation, the V-8 engine returns 17 mpg combined.

As you'd expect, the fit and finish of the Flying Spur are exquisite. The interior will impress anyone with its variety of top-shelf materials—burled walnut, knurled aluminum, beautiful leather, soft lambswool carpets, layers of lacquer and chrome everywhere—and finely detailed craftsmanship. Buyers can also bring their own choices to the design table. Other additions to the Flying Spur include wireless hotspot capability, a rear-seat entertainment suite, and a feature that lets passengers control more vehicle functions from the back seat.

The Flying Spur doesn't have quite as much rear-seat room as you might expect, but that keeps it relatively small and driver-friendly—and gives folks looking for the chauffeured experience a reason to step up to the stately Mulsanne sedan.

Neither the NHTSA nor the IIHS have crash-tested the Flying Spur, but it's replete with airbags in all directions, as well as traction and stability control integrated with its anti-lock brakes. The standard all-wheel drive can also be seen as somewhat of a safety item.

In its first generation, the big sedan bore the Continental nameplate, but more recently the Flying Spur has been separated from the fastback two-door coupe and convertible models that relaunched the brand more than a decade ago. The two- and four-door models continue to share a platform and bear very similar styling, however.

Introduced in the 2006 model year in the U.S., the Flying Spur evolved carefully over its lifespan. The basics didn't change much in that first generation, and the car always received attention with its four-circle front end, its wedding-cake shoulders and roofline, and the sloping formality of its trunklid. It didn't share the very formal look of the big Bentley Arnage, thankfully—and its styling had positive influences on the Bentley Mulsanne that was introduced for 2011.

Since 2006, the Flying Spur's powertrains have been derived more from Volkswagen Group companies than from the brand's British heritage. The twin-turbocharged 6.0-liter W-12 engine originally laid out 552 hp and 479 lb-ft of torque, and distributed the power to an all-wheel-drive system through a 6-speed automatic. The first-generation Continental Flying Spur's claimed 0-60 mph time of less than five seconds and top speed of 194 mph were eventually bested by a Speed edition, which bumped the W-12 to 600 hp and 554 lb-ft of torque, cutting 60-mph acceleration times to 4.5 seconds and lifting top speed to 200 mph. Handling was unbelievably responsive for the 5,500-pound Flying Spur, and braking power was astonishing and abrupt.

Be the first one to write a review on 2020 Bentley Flying Spur
Rate and Review your car for The Car Connection! Tell us your own ratings for a vehicle you own. Rate your car on Performance, Safety, Features and more.
Write a Review

2020
Nominated for Best Luxury Car
See the winner »
2020
The Car Connection
See The Winner and Nominees »
7.2
Expert Rating
Most Recent Rating
Ready to connect with local dealers?
Get Your Price
You may also like