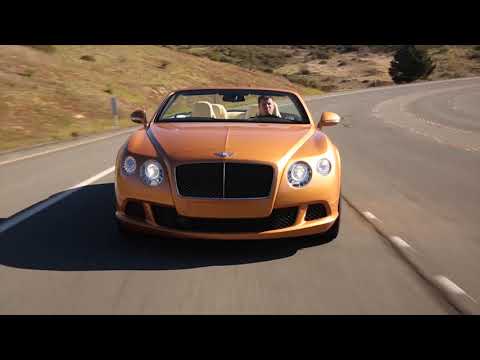 The Bentley Continental GT is a two-door luxury coupe or convertible that combines breathtaking speed with a breathtaking interior.

Ten years ago, the Continental GT catapulted the historic British brand into the 21st century. Since then, it's been a celebrity favorite—and a rival to vehicles like the Rolls-Royce Wraith and the Mercedes-Benz S-Class Coupe, as well as the Maserati GranTurismo and the Ferrari GTC4 Lusso.

Launched in coupe form for the 2005 model year, the GT has seen increases to its power and refinement to its aesthetics. Now in its second generation, changes to the Continental GT have remained evolutionary concerning both the visuals and mechanicals.

The basics of the second-generation coupe and convertible are shared with the Flying Spur sedan. Though the two-doors have a much shorter wheelbase, they share the engine, transmission, all-wheel-drive system, and other performance pieces with the four-door Spur. All cars originally used a 6.0-liter, twin-turbocharged 12-cylinder engine in which the cylinders are arranged not in a V shape, but as a W—basically two narrow-angle V-6 engines mounted side by side with a common crank. This spares some room under the hood, and produces power just as copiously and as smoothly as a conventional V-12.

In the first generation, which was sold until the 2011 model year with one exception, the standard W-12 engine produced 552 horsepower, good for a 0-60 mph time of about five seconds, even though the cars each weighed more than 5,500 pounds. Updated Speed editions saw power rise to 600 hp, while 60-mph acceleration times fell below five seconds and the top speed on coupes rose to 195 mph. A Supersports model added on 21 more horsepower, for a 0-60 mph time of 3.7 seconds, and a manufacturer-rated top speed of 204 mph. An ISR special edition reached 631 hp. Each version used a 6-speed, paddle-operated automatic transmission. Each also rode on an independent suspension, with power shuffled to the wheels via all-wheel drive featuring a Torsen differential. Fuel economy in the Continental GT in this generation was a very low: 10 mpg city, 17 mpg highway, mitigated only a little by the flex-fuel capability of all versions.

Among the myriad convenience and luxury features on the Continental were a marvelous convertible lid on the GTC versions that folded closed or open in 25 seconds. Lavish interior materials distinguished this Continental range even from the Ferraris and Maseratis of the world, and a 1,000-watt Naim audio system was on the options list for a mere $6,000 or so. The Mulliner trim package of quilted leather, knurled chrome, and turned aluminum trim was a highlight of modern-day automobile construction.

In the 2012 model year, Bentley updated the Continental GT and GTC with slightly revised styling, and made a 567-hp version of the W-12 standard. Quicker shift programming and a revised torque bias to 40/60 for the all-wheel-drive system were matched with slightly sportier handling. The Speed editions were dropped for the 2012 model year, while the Supersports GTC models were carried over intact from the 2011 model year, without the cosmetic and mechanical changes.

A new V-8 drivetrain became available for the 2013 model year, with a net output of 500 hp. It was paired with an 8-speed automatic transmission. Because the V-8 was lighter, Bentley says performance nearly rivalled that of the W-12 cars, while fuel economy improved by as much as 40 percent.

Also for 2013, the Speed model returned in both coupe and convertible form. Unveiled at the 2013 Detroit auto show, the new Continental GT Speed Convertible offered figures to match the coupe: a stout 616 hp and 590 lb-ft of torque, enabling 4.1-second 0-60 mph acceleration and a top speed of 202 mph. The GT Speed Coupe accelerated to 60 mph in 4.0 seconds and hit a 205-mph top speed.

For the 2014 model year, Bentley added yet another model to the lineup with the Continental GT and GTC V8 S versions. They used a higher-output version of the twin-turbocharged V-8 that produced 521 hp and 502 lb-ft of torque, carrying less weight than the W-12 version. Then, for 2015, Bentley updated the GT Speed to produce 626 hp and 607 lb-ft from its W-12 engine, increases of 10 hp and 27 lb-ft compared to the previous Speed coupe and droptop.

The 2015 model year also brought a very limited run of Continental GT3-R models. Power for this variant came from a 592-hp version of the GT V-8 S's twin-turbo V-8. This Bentley shed 220 pounds compared to the V8 model, in part by removing the rear seat, creating what was the quickest Conti yet. Only 300 copies of this racy Continental were built and sold globally.

Continuing the pace of yearly updates, the 2016 Continental GT received a bit of a makeover, albeit a subtle one. Up front, noticeable changes included a smaller grille, vents carved into the fenders, and a revised bumper shape. In back, all models got a new decklid, while the GT Speed and V8 S models received a new lower fascia. Inside, gauge faces evolved, the steering-wheel diameter shrunk, and wi-fi became available as an option.

A new Black Edition was also introduced for the 2017 model year.

In addition to dropping the coupe for the short 2018 model year, Bentley brings back the Supersports convertible, now with 700 horsepower. The engine lineup also consists only of W-12s, now with 568 hp in the GT, and 615 hp in the GT Speed. Also new is the limited-edition Timeless Series, which gets takes a luxury focus, including Mulliner content, and features a Liquid Amber Veneer paint finish.

Expect a redesigned Continental GT convertible to follow the coupe within a year or so.

Rate and Review your car for The Car Connection! Tell us your own ratings for a vehicle you own. Rate your car on Performance, Safety, Features and more.
Write a Review
2015 Bentley Continental GT 2-Door Convertible