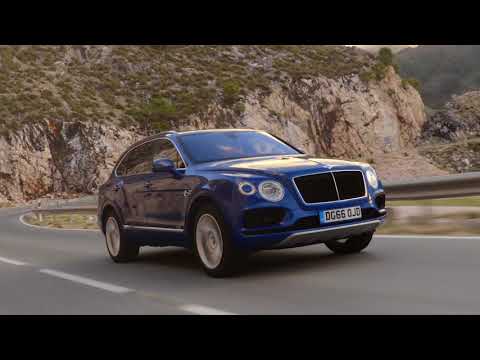 The Bentley Bentayga is an ultra-luxury SUV that seats up to seven in superlative comfort.

It's available with a high-powered W-12 engine or a plug-in hybrid V-8.

With the Bentagya, Bentley has just one direct rival for now: the Land Rover Range Rover, in its most opulent Autobiography trim.

However, there are more competitors in the offing. Mercedes will offer a Maybach-trimmed version of its big GLS SUV, alongside its military-grade G-Class, while BMW will also sell a new X7 in 2019. A Rolls-Royce Cullinan SUV has been launched, and a high-performance Lamborghini Urus SUV has as well.

Bentley first showed the five-door sport-utility vehicle at the 2015 Frankfurt Auto Show, after showing it as a concept vehicle at auto shows for years.

The Bentagya is unmistakably a Bentley, incorporating all the usual cues of the brand's coupes, convertibles, and sedans. The front end is dominated by a massive grille and three other mesh-grille air intakes. There are LED headlights, paired with what look like oval running lights—which they are, though they also incorporate telescoping headlight washers that can run at extremely high speeds. Big 22-inch wheels on top versions give the Bentayga tremendous ride height, while flying-B logos are woven into its fender vents and taillights.

The cabin mixes the customarily lush levels of chrome, leather, and wood. Its most stunning detail, no doubt, will be the $170,000 optional Mulliner Tourbillon timepiece by Breitling. Embedded in the dash, it can be trimmed with diamond markers, one of three gold trims, and either ebony or mother-of-pearl facing.

The boundless luxury is backed up by what promises to be exceptional performance. The Bentayga's powertrain at launch will be a 600-horsepower W-12 engine, with twin-turbocharging and 663 pound-feet of torque. To conserve fuel—and to meet EPA estimates of 16 mpg combined—the engine is coupled to an 8-speed automatic, and incorporates direct injection, stop-start, fuel cutoff to some cylinders under light operation, and a "sail" mode that unlocks the torque converter in top gears when the throttle is released. Future versions will be powered by plug-in hybrid and turbodiesel drivetrains; a twin-turbo V-8 is a likely spin-off, too.

Bentley claims the Bentayga is not only the world's most luxurious SUV, but that it's also the fastest, with an estimated top speed of 187 mph. With the W-12, Bentley quotes the 187-mph top speed, as well as a 0-60 mph time of 4.0 seconds, both quicker and faster than the Range Rover or Porsche Cayenne Turbo S.

To tailor its extreme performance from pavement to trail, the Bentayga comes with standard all-wheel drive, with a Torsen center differential and built-in hill-descent control that works at speeds of up to 18 mph. An air suspension is also standard; it offers four ride heights, including a tall mode for cruising over off-road obstacles. The Bentayga's gauges offer data on altitude, roll, pitch, steering angle, and direction. On road, the Bentayga's electric power steering, air suspension, and adaptive dampers can be configured in one of eight driving modes to customize performance.

The Bentayga is a big vehicle, at 68.6 inches tall, on a 117.9-inch wheelbase and an overall length of 202.4 inches. The initial versions will seat four or five passengers, but a seven-passenger, three-row model is expected to join the lineup. Seating configurations can be upgraded to include power heated and ventilated buckets front and rear, with up to 22-way power adjustment; the back seat can be ordered in an executive setup that comes with a tablet device for controlling infotainment, as well as a center console with USB ports.

On all Bentaygas, a hands-free tailgate is standard. On the most luxurious versions, a stow-away "event seat" tucks in the cargo area, so you don't have to remember your Coleman camper chair. A range of lifestyle options will be bundled in packages; everything from a water-resistant tray and locker to a Mulliner Hamper Set complete with Linley china and a refrigerator will be offered.

Safety gear includes adaptive cruise control with stop-and-go ability, programmed to follow vehicles ahead in slow traffic with a minimum of intervention; predictive cruise control, which looks at data for the road ahead to smooth vehicle behavior and trim fuel consumption; traffic-sign recognition; automatic parking assistance; night vision; and a head-up display.

Standard and available luxury features abound, and will include a panoramic glass roof; an 8.0-inch touchscreen display; navigation; a 60GB hard drive for data and music storage; and a removable 10.2-inch tablet for back-seat passengers, linked to the outside world by 4G LTE, Bluetooth, and an in-car wi-fi hotspot.

Audio systems include a standard and a "signature" offering, with top versions gaining a 1,950-watt Naim for Bentley setup with 18 speakers.

Be the first one to write a review on 2020 Bentley Bentayga
Rate and Review your car for The Car Connection! Tell us your own ratings for a vehicle you own. Rate your car on Performance, Safety, Features and more.
Write a Review