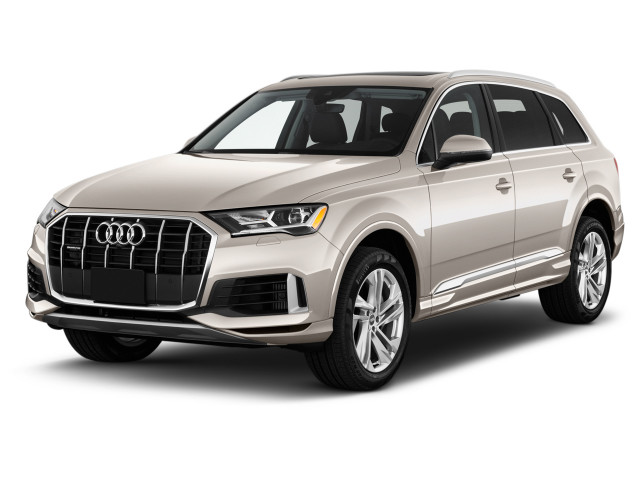 The Audi Q7 is the automaker's full-size luxury family SUV. It seats up to seven passengers.

It is related to the Audi Q8, but offers three rows of seats. The Q7 is distantly related to the Bentley Bentayga, Porsche Cayenne, and even counts the Lamborghini Urus in its family tree.

With the Q7, Audi competes with the BMW X7, the Mercedes-Benz GLS-Class and GLE-Class crossovers, Lincoln Aviator, Cadillac XT6, and the Volvo XC90.

For 2021, Audi added more standard safety features but left the Q7 largely unchanged from the updated 2020 version. For 2022 it made just a few equipment changes.

Audi introduced a second-generation Q7 for the 2017 model year.

The look is more like that of a tall wagon than a hulking SUV, and the new interior is the most luxurious and refined yet for any Audi crossover. The new platform lowers weight by a claimed 700 pounds. Audi initially made the Q7 available with the corporate 3.0-liter, supercharged V-6 that makes 333 horsepower and 325 pound-feet of torque. A 248-hp 2.0-liter turbo-4 joined the mix later, and a plug-in hybrid model will be part of the lineup.

Audi managed to make the Q7 slightly narrower and shorter overall while increasing cargo room and second-row leg room; head room has also been increased, and the Q7 continues to offer a third row of seats.

Audi has filled the new Q7's cabin with its latest technology. The interface uses a version of the Virtual Cockpit digital-instrument/infotainment combo first used on the TT, but the Q7 benefits from a second control screen located in the center stack. It also offers integration with iPhone and Android smartphones through Apple CarPlay and Android Auto, with the option to add Android tablets for back-seat passengers. This is the most advanced Audi infotainment setup yet, and should make its way into the rest of the brand's lineup shortly.

Audi has shown a plug-in hybrid version of the new Q7, dubbed e-tron, which uses electric motors and either a diesel or gas engine. The model may be offered here, but it's likely that a U.S.-bound e-tron would eschew the TDI engine for one that sips gasoline.

For its sophomore year, the 2018 Q7 was mostly unchanged. A proximity key with keyless ignition was made standard, a Bose audio system came on Premium Plus models, and Prestige models gained power door closers.

For 2020, Audi swapped out the supercharged V-6 for a more potent but less efficient 335-hp turbocharged V-6. It also added a performance variant in the SQ7, which is powered by a 500-hp 4.0-liter twin-turbo V-8. The 2020 Q7 gained a new digital dash and other upgrades.

Shown first as a concept vehicle, the Q7 was Audi's first SUV when it joined the U.S. lineup in the 2007 model year—although Audi had offered a higher-riding "Allroad" version of the A6 Avant wagon in prior years. The Q7 was expressly designed to appeal to sport-'ute shoppers.

Initially, the Q7 came with only a single powertrain: a 4.2-liter V-8 with 350 hp, all-wheel drive and a 6-speed automatic transmission. Still, it proved a major upgrade over the usual SUV handling—and most of all, the usual SUV styling, with its sleek side view.

In the 2008 model year, Audi addressed the fuel-economy shortcomings of the V-8 somewhat with a new 280-hp, 3.6-liter V-6 option—and then again in 2009 when it introduced a turbodiesel V-6 version of the Q7 capable of 17 mpg city, 25 highway, according to the EPA. A 333-hp version of the gas-powered V-6 was added later and the V-8 was dropped from the lineup.

For 2015, three V-6 versions of the Q7 were available with the sweet-shifting automatic transmission delivering power to all four wheels and with an adjustable air suspension tuning the ride quality to near-ideal, as long as you stay away from the larger wheel options.

The Audi Q7 has been among the safest SUVs on the road. The NHTSA gave in 2011 the Q7 its highest ratings for front and side impact protection, and has also awarded the Q7 four stars for rollover resistance. The IIHS rated the Q7 as "Good" in front, side and rear impacts, and generally considers the 'ute to be one of the safest picks.

Rate and Review your car for The Car Connection! Tell us your own ratings for a vehicle you own. Rate your car on Performance, Safety, Features and more.
Write a Review
2017 Audi Q7 3.0 TFSI Prestige

The best Audi we ever owned.

We wanted something different. Everybody in our town would be driving, either BMWs or Mercedes Benz. We chose the Audi A6 and since that moment, we fell in love with Audi's quality, style and performance.

My wife wanted to trade our X5 for something different and we opted to buy the new 2017 Audi Q7. The thing was in the showroom and it was beautiful.

We have driven the Q7 all over the place. Right now, it shows 11,299 miles of great performance and trouble free.

Our local dealer will wash our Q7 free of charge. We make an appointment, show up, they take the Q7 to get it washed (free of charge), we enjoy a nice cup of hot coffee with try to decide what to eat from the many things the dealer offers to their customers (free of charge).

If anyone is looking for a well built performance SUV, take a look at the new 2017 Q7. Chances are, you will like what you will see and potentially, buy one and take it home.

Made for a man & not designed for women & moms!!