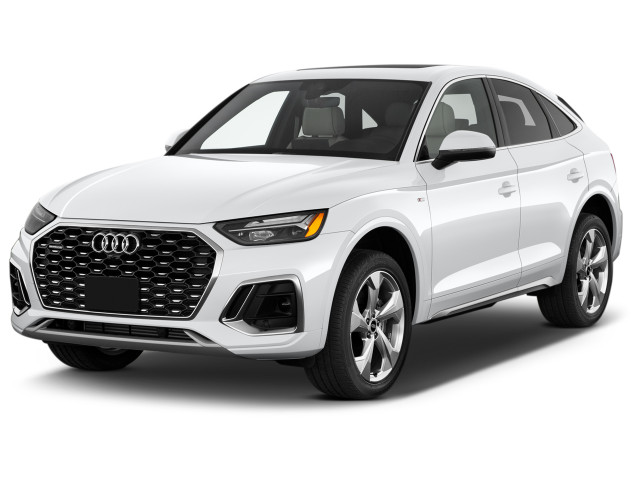 The Audi Q5 is a luxury compact crossover SUV that quickly became one of the automaker's bestselling vehicles.

A redesigned Audi Q5 arrived for the 2018 model year. The latest Q5 launched first with a 2.0-liter turbo-4 and standard all-wheel drive and a more powerful SQ5 followed later.

With the Q5, Audi has a rival for vehicles such as the BMW X3, Mercedes-Benz GLC-Class, Volvo XC60, Cadillac XT5, and Range Rover Evoque.

The Q5 was mildly updated in 2021 with new bumpers and a new touchscreen infotainment system.

The newest Audi Q5 sticks to the recipe that made it a success among luxury crossover shoppers. The Q5 is partially related to the A4, but boasts better ground clearance and standard all-wheel drive for all-weather situations.

The latest Q5 not only rides on the same architecture as the Audi A4, but also it shares much of the sedan's powertrain and interior. Highlights for the new model include an all-wheel-drive system that disconnects the rear differential to save fuel and then, Audi claims, it reconnects the rear wheels quicker than any rival. Inside, the Q5 gains as an option Audi's Virtual Cockpit instrument cluster that replaces conventional gauges with a high-resolution, multi-configurable digital screen.

Initially, the Q5 was available only with a 2.0-liter turbo-4 rated at 248 horsepower and 273 pound-feet of torque, improvements of 28 hp and 15 pound-feet over the outgoing model. It's mated to an 8-speed automatic gearbox and it sends power to all four wheels exclusively; unlike some of its rivals, the Q5 is not available in a front-wheel-drive configuration. That turbo-4 was uprated for 2021 at 261 hp.

A replacement for the performance-oriented SQ5 also has arrived. Power comes from the new turbocharged 3.0-liter V-6 fitted to the latest S4 and S5 sedan and coupe, with peak output rated at 349 hp and 369 pound-feet of torque. Mated to an 8-speed automatic and driving all four wheels, the engine will hustle the SQ5 from 0-60 mph in 5.1 seconds.

The SQ5 also features a more buttoned-down suspension, sports seats, and some unique styling touches. It's the only model in the range available with an adjustable air suspension.
The new plug-in hybrid makes use of a 141-hp electric motor and a liquid-cooled 14.1-kwh battery pack for more power and up to 25 miles of electric-only driving. With 362 total system horsepower, the plug-in hybrid is a rocket —and that’s before we talk about its 2.5-hour charging time on a Level 2 charger.

Standard heated seats on all models headlined the major changes for 2019, while 2020 models brought the SQ5 performance model and the Q5 plug-in hybrid.

For 2022, the Q5 returned with standard and Sportback body styles, with a standard S line body kit and an available Black optic package with 20-inch wheels. Hybrids gained a bigger 17.9-kwh battery.

The Q5 first arrived in U.S. showrooms in late 2009 as a 2009 model, and was left virtually unchanged for the 2010 model year. It was offered in a single configuration: with a V-6 engine, an automatic transmission, and all-wheel drive. This initial Q5 had a smart mix of luxury and performance off the bat. The heart of the performance package was a 3.2-liter, 270-horsepower V-6, teamed up with a 6-speed automatic with manual gear selection and all-wheel drive. It was powerful, but created a little more volume and vibration than expected from an otherwise refined German offering. Gear changes were smooth enough, and Audi claimed a 0-60 mph time of 6.7 seconds.

The Q5's chief dynamic liability is its fairly stiff ride, and Audi's adjustable Drive Select suspension and steering are some of our least favorite applications of chassis electronics. The Q5 will tow 4,400 pounds and has nearly 8 inches of ground clearance, so mild off-roading isn't entirely out of the question. Most versions come with luxury features such as leather, Bluetooth, and satellite radio; a panoramic sunroof is a great addition to the options list.

In the 2011 model year, Audi added a new drivetrain option to the Q5 mix—a version of the VW/Audi corporate turbocharged 4-cylinder making 211 horsepower. Mated to a 6-speed automatic and front-wheel drive in base form, this is the Q5 we recommended unanimously at the time. It felt lighter on its feet, produced much better fuel-economy numbers than the V-6 (20/27 mpg vs 18/23 mpg), and had a lower sticker price. That said, it's still rare to find a Q5 priced below $40,000 with popular features.

For the 2013 model year, the Audi Q5 carried over its 2.0-liter turbo-4, but offered as a high-output option its 272-hp supercharged 3.0-liter V-6 coupled to an 8-speed automatic, plus a new Q5 Hybrid was added to the mix. The hybrid blends the turbo-4 powertrain and 8-speed automatic with lithium-ion batteries and a 54-hp electric motor for a net of 245 hp, a 0-60 mph time of 6.8 seconds, and a combined gas-mileage rating of 26 mpg, according to the EPA. Quattro all-wheel drive is standard with all powertrains, including the hybrid.

Audi added a TDI turbodiesel Q5 to its lineup for the 2014 model year and it earned EPA ratings of up to 27 mpg combined.

On the other end of the spectrum, an SQ5 was added as the high-performance version of the Q5. It uses a 354-hp version of the corporate supercharged 3.0-liter V-6 and also gets upgraded chassis and suspension components, although it manages just 19 mpg combined. With those additions, the available Q5 powertrains numbered four, easily the most variety for any crossover in its class.

For 2017, Audi discontinued the Q5 Hybrid and added an available appearance package to the top-of-the-line SQ5.

Rate and Review your car for The Car Connection! Tell us your own ratings for a vehicle you own. Rate your car on Performance, Safety, Features and more.
Write a Review
2018 Audi Q5 2.0 TFSI Tech Premium Plus

Disappointed with the ride and seat comfort.

Has a great new look, awesome interior, has many safety features. Competitiors like Mercedes, inifinit, and BMW have basic interiors.
people found this helpful.
Was this review helpful to you? Yes
See More Reviews