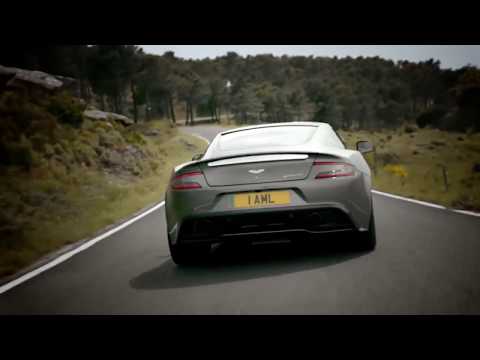 The Aston Martin Vanquish is a luxury two-door coupe or convertible that served as the figurative top of the automaker's sleek portfolio. Without a roof, it's called a "Volante"—calling either "gorgeous" is just fine by us too.

With the Vanquish, Aston has rivals for the Bentley Continental GT, Mercedes-Benz S-Class Coupe, and Rolls-Royce Wraith.

The Vanquish was replaced in 2019 with the DBS Superleggera.

Aston Martin previewed the latest Vanquish with its Project AM310 Concept. A nearly identical production version arrived for 2014 wearing a carbon-fiber body with visual influences from the original Vanquish.

At launch, it was powered by Aston's most powerful production engine yet, a version of its 6.0-liter V-12 initially rated at 565 horsepower and 460 pound-feet of torque. Only an automatic transmission was offered, with the initial run using a paddle-shifted Touchtronic 2 6-speed unit that sent power to the rear wheels.

For the 2015 model year, the Vanquish swapped a 6-speed automatic transmission for an 8-speed, greatly improving responsiveness and driving character. Upgrades to the engine tune and control units resulted in a rise to 568 hp and 465 lb-ft output from the 6.0-liter V-12 engine. The smidgen of added power and new transmission helped reduce the Vanquish's 0-to-60 time by a half-second, to 3.6 seconds. At the same time, fuel economy rose slightly, which is always a neat trick when performance is so markedly improved.

Despite a carbon-fiber body, the Vanquish's extensive luxury and aluminum-and-steel chassis result in a curb weight of 3,900 pounds. The less-than-sprightly weight lends a substantial feeling to the Vanquish's movement, encouraging smooth and effortless cruising, but discouraging truly sporty behavior—despite quick acceleration and a 201-mph top speed.

The Vanquish's equipment list is excellent, as you might expect from a car that stickers close to $300,000, and includes a fantastic 1,000-watt Bang & Olufsen sound system; iPod and iPhone integration; Bluetooth phone and audio connectivity; a wi-fi hotspot; and navigation.

Most Aston Martin buyers will end up customizing their order somehow, and the company is more than happy to oblige. For extra cost, Aston will outfit the car with whatever upholstery and color combination of hides and paint that the person writing the check would like, and the personalization service extends to other one-off options and fitments. The company now calls this service Q by Aston Martin, lending it a slightly more mysterious and Bond-like air.

The 2016 and 2017 models were largely unchanged, except for an updated infotainment system with Apple's CarPlay as standard.

For the 2018 model year it becomes the Vanquish S, receiving a power bump to 580 horses, getting a suspension tweak for sharper handling, and also undergoing exterior changes inspired by the Vulcan hypercar. Larger intake manifolds increase horsepower, while the 8-speed automatic is reworked for quicker shifts and more refinement at low speeds. The dampers, spring rates, and sway bar bushings are revised to improve dynamics. On the outside, exposed carbon fiber is used for a more aggressive front splitter and rear diffuser, both inspired by the look of the Vulcan. The Vanquish S is also now offered with carbon-fiber hood louvers, new forged five-spoke diamond turned wheels, and several new painted graphics packs.

In its initial form, from 2001 to 2005, the Vanquish was known as the V12 Vanquish and featured a 5.9-liter V-12 engine making 450 hp and 400 lb-ft of torque. The car was available in either a 2+2 or 2+0 seating configuration and used a variety of high-tech features and construction methods, such as a bonded chassis, aluminum and composite materials throughout, a drive-by-wire throttle, and an electrohydraulic transmission. It was also one of many Astons before and since to star in a James Bond film.

The second iteration of the car was known as the Vanquish S and was built from 2004 to 2007. More a collection of revisions than a full redesign, the S's primary mechanical difference was an increase in engine output to 514 hp. Slight modifications to the exterior and interior marked the new Vanquish S to skilled observers. A limited run of the final 40 cars built in the line were called the Vanquish S Ultimate Edition and received a special Ultimate Black paint scheme as well as special interior touches.

Be the first one to write a review on 2019 Aston Martin Vanquish
Rate and Review your car for The Car Connection! Tell us your own ratings for a vehicle you own. Rate your car on Performance, Safety, Features and more.
Write a Review