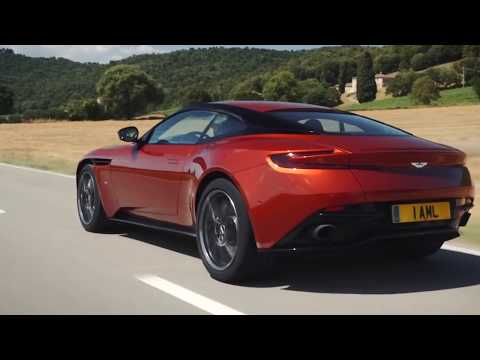 The Aston Martin DB11 is a two-door ultra luxury coupe or convertible (called the DB11 Volante) that replaced the DB9 in the automaker's lineup.

(For math majors, the DB10 was a one-off movie car made exclusively for the James Bond film "Spectre.")

With the DB11, Aston Martin competes with heavy-hitters such as Ferrari, Rolls-Royce, Bentley, and Mercedes-Benz.

The DB11 made its debut for 2017 as a V-12-powered coupe. For 2018, it adds a V-8 engine option, a 4.0-liter twin-turbo unit sourced from Mercedes-AMG, and adds a convertible body style that Aston Martin calls Volante.

Instantly recognizable as a DB, the DB11 manages enough change that it looks fresh and distinctive. Aston Martin's signature grille returns, but it is deeper and wider. New LED headlights look considerably more modern than those they replace. A new clamshell hood has more pronounced hood lines without the cutlines. In fact, it's one large piece of rolled aluminum. Perhaps the most controversial element is the "floating" roof look. It features a two-tone appearance, but keeps its sleek profile. The rear gets LED taillights that extend into the center panel.

Many of the design features are there for aerodynamics. The gill-like “curlicues” behind the front wheels release high-pressure air from inside the wheel arches via concealed vents within the redesigned side-strakes. The AeroBlade design of the rear pillars also draws in air through a vent at the base of each rear pillar and channels through the trunk and out the back, acting as a spoiler.

Under the sumptuous hood buyers can opt for a pair of new engines. First up is the twin-turbocharged 5.2-liter V-12 that makes 600 horsepower and 516 pound-feet of torque. Also on offer is the Mercedes-AMG twin-turbo 4.0-liter V-8. With either engine, the power is sent through a torque tube via a carbon fiber driveshaft to a rear-mounted 8-speed automatic transmission. The DB11 has only rear-wheel drive.

The new platform is a bonded aluminum structure like Aston Martin’s previous design. However, it now incorporates more lightweight materials and is more space efficient. Twenty-inch wheels are fitted at all four corners, and the iron brakes are massive: 15.7-inch rotors with six-piston calipers up front and 14.2-inch rotors with four-piston calipers in the rear. Performance is also aided by a brake-based torque vectoring system, adaptive dampers, and a driving mode selector.

The interior of the DB11 features beautiful materials, a digital instrument cluster, an 8.0-inch screen with a rotary dial and touchpad, an additional 2.1 inches of head room and 3.4 inches of leg room in the rear, and an available Bang & Olufsen audio system. Safety features include camera-based monitoring systems, parking aids, and even ISOFIX mounting points for a pair of child seats in the back.

Be the first one to write a review on 2019 Aston Martin DB11
Rate and Review your car for The Car Connection! Tell us your own ratings for a vehicle you own. Rate your car on Performance, Safety, Features and more.
Write a Review