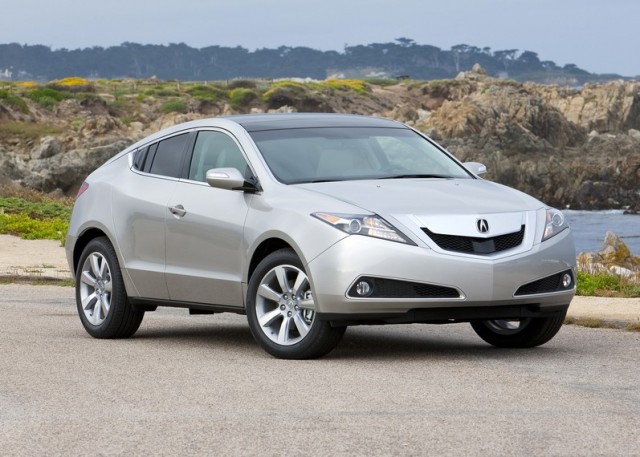 The Acura ZDX is a five-door hatchback that matches up against the BMW X6 and, in theory, melds crossover utility and versatility with a sexy coupe form. In reality, it's still tough to tell what Acura was thinking when it first signed off on the ZDX; succeeds in looking swoopy and coupe-like, and it performs reasonably well, but it fails at providing either more usable adult backseat space or much more cargo space than you'd find in other sporty cars.

Check out The Car Connection's coverage of the 2013 Acura ZDX, including pricing and hi-res image gallery.

Appearing first at the 2009 New York Auto Show as a production-bound prototype due later that same year as a 2010 mode, the ZDX pushes into a new yet hard-to-define segment of the market that wants a chunkier crossover vehicle that outwardly flaunts a more coupe-like appearance. It borrows most of its underpinnings and construction from the larger Acura MDX utility vehicle, which makes it quite closely related to the Honda Pilot as well.

All versions of the Acura ZDX have included a solid set of performance hardware, including a 300-horsepower, 3.7-liter VTEC V-6, a six-speed automatic transmission (with steering-wheel paddle shifters), and Acura's Super-Handling All-Wheel Drive (SH-AWD), which can send up to 90 percent of power to the front wheels or up to 70 percent to the back—or also modulate it side-to-side to enhance cornering performance or provide more confidence on slippery roads.

An Integrated Dynamics System (IDS) was optional on the ZDX, providing Comfort and Sport settings, although we found very little difference between those two modes and ended up liking the base setup a bit better. All models have a carlike strut-and-multilink suspension, and in either case, the ZDX rides somewhat harshly for a luxury vehicle, while the cabin is reasonably quiet.

Over a first drive and several follow-ups with the ZDX, we were satisfied with the ZDX's strong powertrain performance and reasonably good handling for a taller vehicle. But much about the interior packaging was disappointing. The low roofline and tapering body width severely limit backseat space, leaving only two spaces that are too small for adults (there's just not enough headroom); impractically shaped rear door openings also contribute to the lack of usability. In back, it doesn't get much better for cargo, as a rather tall cargo floor plus low hatch glass limit space and sometimes force you to choose between cargo and rear visibility. Rear seatbacks do fold forward to a flat position—effectively making the ZDX the most useful as a two-seat wagon.

In the details, there's a lot to like about the cabin. It feels like a luxury vehicle, and up to its roughly $50k price tag, in nearly every respect inside, with soft leather upholstery, accent stitching, and a stunning wrap-around instrument panel.

For most of its run, the ZDX was offered in base, Tech Package, and Advance Package models, with the Tech Package bringing an excellent ELS surround-sound system, a navigation system with 15-GB hard-drive storage and real-time traffic and weather, solar-sensing dual-zone climate control, and a keyless entry and start system with personalized settings. The Advance Package has brought the IDS system, a rearview monitor, adaptive cruise control, collision mitigation braking, and ambient lighting.

Rate and Review your car for The Car Connection! Tell us your own ratings for a vehicle you own. Rate your car on Performance, Safety, Features and more.
Write a Review
2010 Acura ZDX AWD 4-Door

Probably the best vehicle we have owned. Sporty and performs well.
people found this helpful.
Was this review helpful to you? Yes