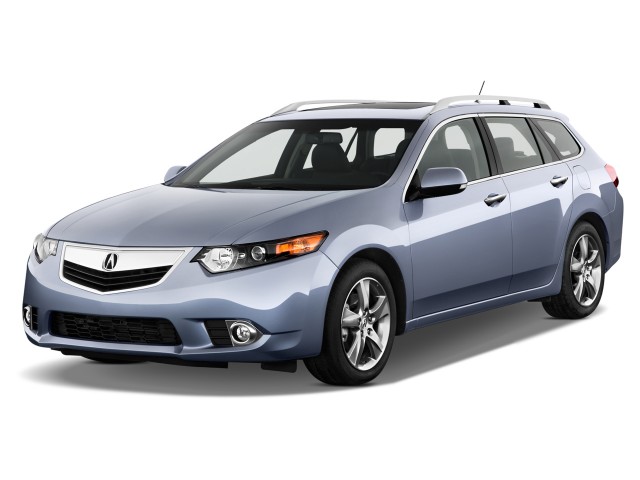 The Acura TSX is offered as either a four-door sedan or a five-door wagon, and for many model years of the past decade it's arguably been the most engaging model that Honda makes

Part sport sedan, part fuel-efficient and well-equipped compact luxury sedan, the TSX has been considered in the same group as the Volvo S60, Audi A4, and Buick Regal, as well as the Nissan Maxima.

The new 2015 Acura TLX sedan effectively phases out both the TL and the TSX nameplates.

Check out The Car Connection's full coverage of the 2014 Acura TSX, including pricing and trim levels. You can also compare the Acura TSX to its competitors.

With the TSX, Acura realized the premium segment was getting smaller. In 2004, the brand began importing the European version of the Honda Accord, reskinned with Acura details, to sell as the TSX. The trim TSX already had the larger Acura TL and RL sedans offering V-6 engines, so Honda decided the smallest Acura four-door would be fine with a four-cylinder only in that first generation, from 2004-2008. Enthusiasts loved the package. The 200-horsepower 2.4-liter four-cylinder engine teamed with either a five-speed automatic or a six-speed manual gearbox and routed power to the front wheels.

Though it looked a bit anodyne and basic, this TSX handled very well and accelerated nearly as quickly as the larger V-6-powered TL, thanks to its lower curb weight. Inside, the TSX had somewhat tight interior dimensions, but a raft of luxury add-ons included satellite radio, leather seating and a sunroof--which you could also get with the somewhat less expensive, and more roomy, American-market Honda Accord. The TSX remained almost a cult car through this first generation, earning good reviews and good crash-test results for frontal impacts, too, but side-impact crash protection didn't score quite as well. Over time, the engine found 5 horsepower for a total of 205 hp, and Bluetooth became standard.

The second-generation 2009 Acura TSX brought with it a heavier, bigger body and to many admirers, the best interpretation of Acura's shield-style grille. The four-cylinder engine carried over with a new power rating of 201 hp, and the gearboxes were carried over, along with nimble front-drive handling and a firm, absorbent ride. The TSX added more features, such as a USB audio interface and a premium audio system, and improved its safety performance to earn a "Top Safety Pick" designation from the Insurance Institute for Highway Safety--an accolade maintained for most of the following years. Rear-seat room remained at a premium, however.

In the 2010 model year, the TSX carried over its four-cylinder powertrain while it added a new V-6 engine option. The V-6 makes 280 hp and comes only with the automatic transmission. Handling remains reasonably sharp--though the price of the V-6 TSX soared to the upper 30s, fully loaded.

Acura had planned to offer a 2.2-liter turbodiesel in the TSX for the 2010 model year, but has since scrubbed those plans.

The TSX saw few other changes in its entire second generation, but a new TSX Wagon model was sold beginning in the 2011 model year. The wagon's sole drivetrain teams the four-cylinder and five-speed automatic. Both the wagon and sedan returned for the 2013 model year unchanged, and then the 2014 TSX lineup left only the sedan.

Rate and Review your car for The Car Connection! Tell us your own ratings for a vehicle you own. Rate your car on Performance, Safety, Features and more.
Write a Review
2014 Acura TSX 4-Door Sedan I4 Automatic

It is safe,convenient and economical

As my friend uses this car she said It is convenient and I drove this car for a while it is really comfortable, the leather seat I like and the design in and out is perfect
people found this helpful.
Was this review helpful to you? Yes
2013 Acura TSX 4-Door Sedan I4 Automatic Tech Pkg

Great car and fun to drive

Great sedan for family use