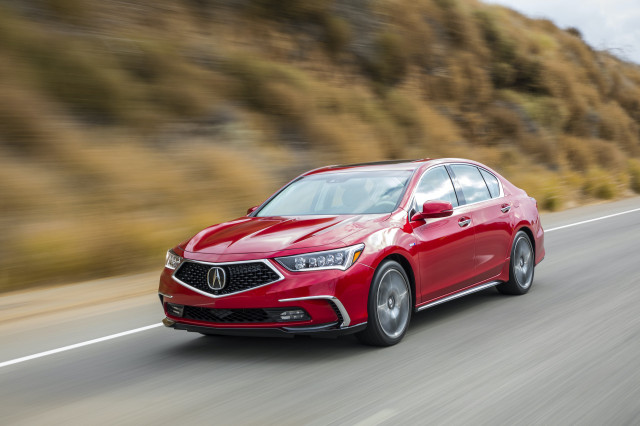 The Acura RLX is a full-size luxury sedan that's a technological wonder. Despite its conservative style, the RLX paved the way for the latest NSX, with its advanced all-wheel-drive system that utilizes a pair of electric motors to supply power to the rear wheels.

Even the front-wheel-drive RLX's rear-wheel steering helps it stand out on the spec sheet, but there's no disguising the fact that this Acura doesn't look particularly special for a model designed to square off against the BMW 5-Series, the Mercedes-Benz E-Class, and the Audi A6, among others. It's a case of "there's more than meets the eye" with the RLX.

Acura changed to the RLX name for the 2014 model year. For 2018, the front end was changed slightly and a new transmission was added. The RLX was unchanged through the 2020 model year.

Technology aside, the more luxurious and spacious interior may be just as deserving of the new name. It's 2 inches longer and 2 inches wider, which helps open the cabin in the RLX and offer more space than the old RL.

Styling is attractive but hardly radical, with a typically aggressive Acura stance and a smooth, arched roofline fronted by LED headlights—framed in a dual-stacked array, with ultra-reflective optical lenses, that should be distinctive day or night.

The RLX gets its power from a version of Honda's latest 3.5-liter V-6. On front-wheel-drive models, it makes 310 horsepower and is mated to a 10-speed automatic with paddle shifters and a sport shift setting. The RLX Sport Hybrid pairs the V-6 with a trio of electric motors—one situated with the engine and transmission on the front axle and two for the rear axle to provide all-wheel drive and torque vectoring, which helps save weight compared to the previous mechanical SH-AWD system. The Sport Hybrid uses a 7-speed dual-clutch automatic and returns a 30-mpg EPA combined rating.

All RLX models include both forward-collision warnings and active lane control. The RLX has aced the IIHS tests, earning it the Top Safety Pick award from the IIHS.

Outside of the choice to go hybrid/AWD or not, the Acura RLX initially came in five trim grades: RLX, RLX with Navigation, RLX with Technology package, RLX with Krell Audio package, and RLX with Advance package. The navigation system included surface-street traffic, and security features include stolen vehicle tracking, airbag deployment notification, remote locking and unlocking, and 24-hour concierge services. Infotainment systems use both an embedded data connection and smartphone integration. The RLX features a next-generation AcuraLink Communication system, with dual LCD display screens, high-end audio, the Aha streaming-audio interface, and an expanded range of infotainment and connectivity features.

After a very brief 2015 model year, the RLX received a small reboot with some updates for the 2016 model. The car's standard and available safety-feature set has been updated and is now collected under the AcuraWatch banner. The tech now includes a surround-view camera system, road-departure mitigation, and cross-traffic monitoring. The suspension has been retuned for improved ride quality, reduced noise, and better handling, and all models now come standard with 19-inch wheels. Acura has also trimmed the trim-level options from five to three, doing away with what was previously the base model and effectively raising the price. As a result, all models now include navigation and some other equipment.

A substantial facelift for the 2018 model year also lowered the RLX's price, while front-drive models gained a 10-speed automatic. Acura now only offers the RLX and the RLX Sport Hybrid.

Rate and Review your car for The Car Connection! Tell us your own ratings for a vehicle you own. Rate your car on Performance, Safety, Features and more.
Write a Review
2018 Acura RLX Sedan Sport Hybrid w/Advance Pkg

What a sleeper - incredible value and quality

The highest quality and performance car that nobody owns. Makes the European vehicles look outdated and low tech. Drive it. Then decide.
people found this helpful.
Was this review helpful to you? Yes