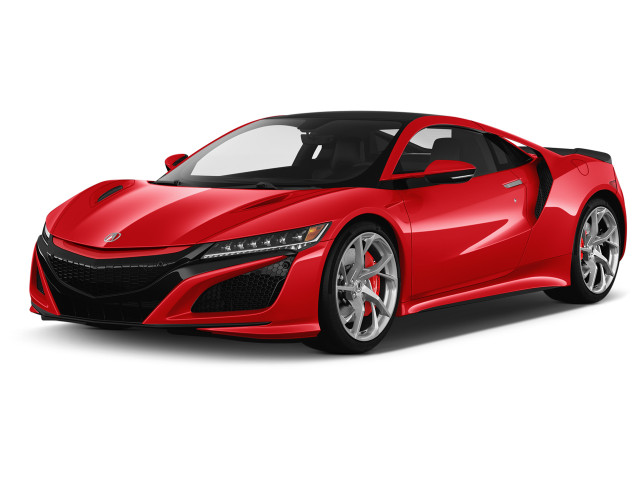 The Acura NSX is a technological marvel and halo car for the luxury brand. It's a two-seat sports car that casts a surprisingly long shadow for such a short run.

The NSX was launched in the 1990 model year as an aluminum-bodied performance halo car, with stats that rivaled contemporary Ferraris and daily-driver ease that rivaled Honda's own Civic. Noted as much for its performance prowess as its livability, it became a legend in its own day.

The Acura NSX endured for 15 years and received small updates before it was eventually discontinued in 2005. A revived NSX had been making the rounds for years before Acura finalized its design and settled on a car that hit the streets in spring 2016.

The current Acura NSX took a slow but steady track for production. Honda developed it at its American engineering arm in Ohio.

In the late 2000s, Honda began to toy with the idea of an NSX replacement and initiated development of a V-10-powered successor. The company scuttled the program as the 2008 recession hit.

Recasting its efforts as part of a plan to turn around the Acura division, it later approved a new NSX concept, which bowed at the 2012 Detroit auto show.

The new NSX went on sale in 2016. Though substantially different from the groundbreaking, aluminum-bodied original, the NSX is once again the mid-engined sports car atop the lineup of Honda's luxury brand.

Power comes from a new direct-injected V-6 with a 9-speed dual-clutch transmission and a built-in electric motor as well as motors on the front axle, which makes the NSX a through-the-road hybrid of sorts—one in which the electric motors can be used at the front wheels to provide all-wheel drive. The same basic setup is found on Acura's RLX luxury sedan and MDX SUV, although those vehicle the engine and transmission mounted up front, with the extra electric motors providing torque vectoring and all-wheel-drive functions at the rear axle.

The NSX's engine has twin turbochargers, a 75-degree V angle, and dry-sump lubrication. It is fed by a combination of port and direct injection.

The NSX measures 170.5 inches long, 74.6 inches wide, 45.7 inches tall, and rides on a 101.4-inch wheelbase. That compares with the original car's 174.2-inch overall length, 99.6-inch wheelbase, 46.1-inch height, and 71.3-inch width. The new NSX chassis is made mostly of high-strength steel but incorporates a carbon-fiber panel for the floor.

The NSX remains a two-seater, with a luxuriously trimmed interior and very small space reserved for luggage.

The car was unchanged for its second model year in 2018, but received a mild suspension rework and new base ContiSport tires for 2019. Aside from minor equipment changes, the NSX was unchanged for 2020 and only gained a new paint color for 2021.

The first NSX came as an outgrowth of Honda's smashing success in Formula One racing in the 1980s. It was inspired by the road cars from its racing rival Ferrari, but with Honda's usual application of its own hallmark intensive engineering.

The NSX was first shown at the 1989 Chicago Auto Show and entered production later that year as a 1990 model. It was sold as an Acura in the U.S.; most of the rest of the world knew it as the Honda NSX. The sports car wore an aluminum body, drew its power from a 270-horsepower 3.0-liter mid-mounted V-6 engine, sent that power to the rear wheels via a 5-speed manual transmission, and had what some drivers felt was the best handling of any of its contemporaries—Ferraris included.

The NSX was so well received, Honda kept the car in production for 15 years. While the basic body and structure remained the same, several changes were made over the car's lifespan. The coupe was joined, and then ultimately replaced, by a targa model with a removable roof panel; a 4-speed automatic option was added; the 5-speed manual was swapped out for a 6-speed unit; and the V-6's output increased by 20 hp on manual models. In 2002, the car received a mild facelift.

While the NSX remained as pure as ever to the end of its run, there were some who lamented a lack of progress, especially compared to the competition of the time.

Be the first one to write a review on 2021 Acura NSX
Rate and Review your car for The Car Connection! Tell us your own ratings for a vehicle you own. Rate your car on Performance, Safety, Features and more.
Write a Review